Taye Diggs, actor/model, will be signing the copies of “Mixed Me!” at the following location.

Taye Diggs is an actor whose awards include the NAACP Image Award for Outstanding Supporting Actor in a Drama Series and Outstanding Actor in a Drama Series, and the Screen Actors Guild Award for Outstanding Performance by a Cast in a Motion Picture. His performance credits include motion pictures (The Best Man Holiday, How Stella Got Her Groove Back, Chicago), stage (Rent, Wicked), and television (The Good Wife, Murder in the First, Private Practice). He lives in Los Angeles and New York City with his son, Walker.

Shane W. Evans is the illustrator of numerous award-winning books for children, including Underground, winner of the Coretta Scott King Illustrator Award, We March,a Kirkus Reviews Best Book of 2012, and and Osceola: Memories of a Sharecropper’s Daughter, winner of the Boston Globe-Horn Book Award.His is also the illustrator of The Red Pencil by Andrea Davis Pickney, an NAACP Image Award for Outstanding Literary Work for Youth/Teens finalist. He lives with his wife and daughter in Kansas City, Missouri. 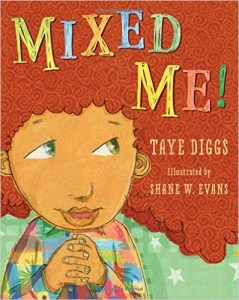 Mom and Dad say I’m a blend of dark and light:
“We mixed you perfectly, and got you just right.”

Mike has awesome hair. He has LOTS of energy! His parents love him. And Mike is a PERFECT blend of the two of them.

Still, Mike has to answer LOTS of questions about being mixed. And he does, with LOTS of energy and joy in this charming story about a day in the life of a mixed-race child.