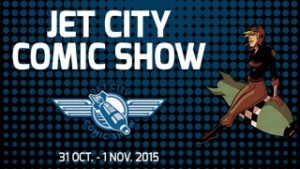 Jet City Comic Show began during a changing of comic book convention landscape 2009. As more ComiCon’s were becoming more Hollywood focused and rising costs for fans and vendors, JCCS was started to put the focus back on comic books in the Seattle/Tacoma area. Focusing on the local creators but also for vendors while keeping the show affordable for all.

The first three Jet City Comic Shows were hosted in Seattle, WA at the Seattle Center. In 2013 JCCS moved down the I-5 corridor to downtown Tacoma, WA in the beautiful Tacoma Convention & Convention Center.

The main goal of every Jet City Comic Show is to promote the comic book industry and expand the awareness of comic books. We want attendees to discover new and exciting comics and their creators. But the absolute most important thing for us is for everyone to have fun!