Judah Friedlander, star of “30 Rock”, will be signing the copies of “If the Raindrops United” at the following location.

Judah Friedlander won international acclaim for his portrayal of Toby Radloff in the award-winning movie American Splendor. He was a series regular on the Emmy Award-winning 30 Rock for seven seasons (SAG Award for Best Ensemble). He can be seen in a cameo in Sharknado 2. He is the author of the bestselling instructional karate book How To Beat Up Anybody, featuring his photography and art work. In 2015, he will release a stand-up comedy album and a stand-up comedy documentary concert film. He lives in New York City. 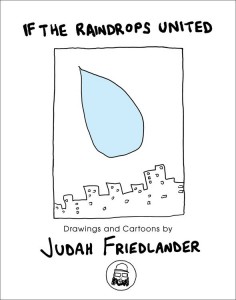 A book of hilarious and ingenious comic drawings from the popular 30 Rock star and “World Champion” comedian Judah Friedlander, hailed by Tina Fey as “one of the all-time great weirdos.”

Most Americans know Judah Friedlander from his role as Frank Rossitano on 30 Rock and from appearances in films like American Splendor and The Wrestler. But long before he became a film and TV star and stand-up comic Friedlander drew stuff.
Now, in this quirky, hilarious, and surprisingly profound collection of drawings, Friedlander shows a new side to his “terrifically entertaining” (New York Times) comedy. Whether imagining George Washington in Las Vegas, plastic surgery for imperfect triangles, and the Keystone Pipeline as a sex act, Friedlander’s “Joodles” push boundaries as they explore the absurdities of American life, sex, and even history and human rights. If the Raindrops United is a milestone in the career of one of America’s most inventive comedians.

Praise for If the Raindrops United:
“Judah has drawn a weird and funny book in the grand ’70s tradition of B. Kliban! I think this book will probably fix the world.”
—Tina Fey

“I’ve known Judah for many years and I still don’t understand how his mind works, but it sure works. Seriously strange. Seriously funny. A National Treasure. Sadly, I need to get a restraining order against him.”
—Paul Giamatti

“Judah thank you for writing a funny twisted book. It is such an easy read. Even dum dums like me can enjoy it!!! Buy this book.”
—Dave Attell

“Judah’s drawings are deceptively simple, yet they become more compelling with every page. His talent as an actor/writer/comedian is further conveyed in ANOTHER medium. He’s a Quadruple Threat. He wears many hats. Literally.”
—Janeane Garofalo

“Reading Judah Friedlander’s new book is a lot like hanging out with Judah himself: occasionally baffling, frequently thought-provoking, but, most of all, consistently hilarious!”
—Mick Foley

“To compare Judah Friedlander to a great cartoonist like Jim Davis would be a compliment to Jim Davis.”
—Wyatt Cenac

“Another hit from The World Champ tackling the signs and symbols you frequently question while dropping hot lava in your American Standard VorMax.”
—Eddie Huang