Whoopi Goldberg, star of “Ghost” and “The View”, will be signing the copies of “If Someone Says You Complete Me, RUN!” at two locations across the country.

Whoopi Goldberg is one of a very elite group of artists who have won the Grammy, the Academy Award, the Golden Globe, the Emmy, and a Tony. Currently, she is the moderator of ABC Television Network’s The View. Whoopi is equally well-known for her humanitarian efforts on behalf of children, the homeless, human rights, education, substance abuse and the battle against AIDS. Among her many charitable activities, Whoopi is a Goodwill Ambassador to the United Nations. 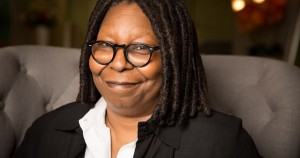 From the provocative and hilarious EGOT winner, bestselling author, and host of The View, Whoopi Goldberg, comes the perfect antidote to all those outdated relationship advice books in the world, weighing in on why marriage isn’t for everybody, and how the life you want shouldn’t be the life everyone else expects you to have.

Whoopi Goldberg has been an electrifying, envelope-pushing public figure of many stripes: acclaimed actor, comedienne, singer, songwriter, author, political activist and talk show host. Now, Whoopi will speak openly about why marriage isn’t for everyone, how being alone can be satisfying, and how what’s most important is understanding who you are and what makes you happy. Wise, funny, and conversation-starting, Whoopi’s message is sure to resonate with the millions of people who struggle with relationships every day.

Goldberg says: “I get to hear from a lot of different people about relationships and this got me trying to figure out why the divorce rate is SO high. It occurred to me that as one who has done it badly often, I might have some insight. It’s hard to really know the other person’s agenda, but if someone says ‘you complete me’…RUN!!!”