Frankie Avalon is a well-known American singer and actor. Throughout his career, he played a variety of parts on local television stations and was featured in songs. Frankie has been cooking since the early years and his Italian Family Cookbook features Italian classic meals such as Pork Milanese, Lasagna, and more. You can take a mouth-watering adventure through his different recipes today.

FRANKIE AVALON is one of the busiest nightclub performers in the country, playing the finest supper clubs and headlining top Las Vegas main rooms. He has a long string of gold record million-seller singles and albums, and 30 films, including Grease and Beach Blanket Bingo. Frankie lives in California with his wife of 50 years, Kay.

RICK RODGERS is an award-winning cookbook writer and culinary instructor. As a publishing consultant, his clients include Williams-Sonoma and Tommy Bahama. 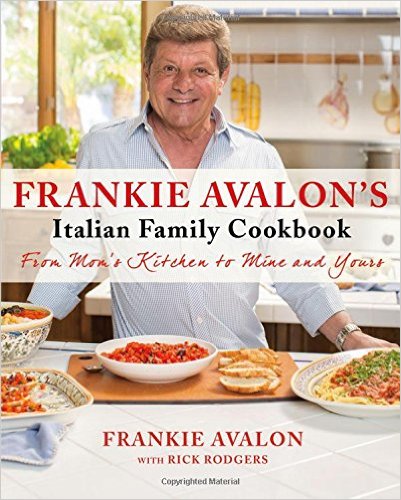 Entertainment legend Frankie Avalon has cooked his way from his mother’s kitchen in South Philadelphia to Hollywood and Las Vegas. Here in his first cookbook are pitch-perfect recipes for such Italian classics as Tomato-Ricotta Lasagna and Three-Meat Sunday Gravy with Pasta, as well as unexpected treasures like Roast Pork with Fig Sauce and Pork Milanese on Kale Salad.

Frankie Avalon’s Italian Family Cookbook is first and foremost a collection of over 80 of his favorite dishes, ones that Frankie and his wife Kay regularly serve to their eight children and ten grandchildren. Weeknight meals, Sunday suppers, and holiday feasts are all covered with must-have recipes?each one taste-tested by Avalons of all ages. And Frankie is a great storyteller, so delicious tales of more than five decades in show business pop up like meatballs in marinara sauce. Novice and experienced cooks will find a lot to love between these pages?dozens of heirloom recipes, mouthwatering food photographs, plus candid shots of Frankie at home in Southern California with his family and some of his favorite food places and pals in the old neighborhood in Philly, tips on Italian ingredients, advice on cooking for a crowd, and more.

Frankie’s latest ventures include his food company, which specializes in prepared Italian food products, like rice balls and sausages, based on his heritage (his father was a butcher) and currently available on QVC.