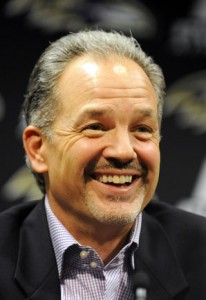 Chuck Pagano, head coach of the Indianapolis Colts, would love to sign copies of “Sidelined” for you at the following locations!

Charles David “Chuck” Pagano (born October 2, 1960) is an American football coach and former player. He is currently the head coach for the Indianapolis Colts of the National Football League (NFL), a position he assumed in January 2012. Pagano has previously served as the defensive coordinator of the Baltimore Ravens in 2011. He is the brother of San Diego Chargers defensive coordinator John Pagano.

Pagano was diagnosed with acute promyelocytic leukemia in September 2012, and took an indefinite leave of absence of his coaching duties. He then underwent three months of treatment at the IU Simon Cancer Center in Indianapolis. On November 5, doctors announced that Pagano’s cancer is in remission. To support Pagano, two dozen of the Colts’ players, and two of their cheerleaders, shaved their heads as part of a movement to support Pagano known as “CHUCKSTRONG”. Offensive coordinator Bruce Arians led the Colts during the next 12 games. Pagano returned to his head coaching duties on December 24, 2012. 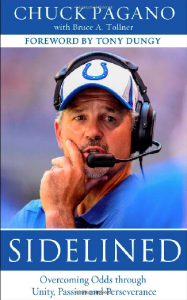 Chuck Pagano, head coach of the Indianapolis Colts, has become one of the most inspiring, intriguing personalities in the game of football. Only three games into his rookie season in 2012, Pagano was diagnosed with leukemia, sidelined by the side effects chemotherapy and months of recovery. Undeterred, Pagano didn’t let the confines of his hospital bed keep him from coaching: texts, calls, and emails kept him in constant contact with players, staff, and assistants. Motivated to be just as strong and determined as their ailing coach the team started winning game after game, compiling an impressive 11-5 record. The players weren’t the only ones touched by Pagano’s hope and strength of character. Inspired by the tenacity and toughness of their beloved coach, a newcomer to town, thousands of fans united to form Chuckstrong, a movement that soon raised millions to help beat cancer. Pagano, fueled by his faith, his family, and his love of football, returned to lead the Colts to another winning season and the divisional playoffs in 2013. With Pagano’s practical lessons on living, loving, and leading, Sidelined, which includes an 8-page color photo section, inspires us all to stay in the game and never accept defeat.