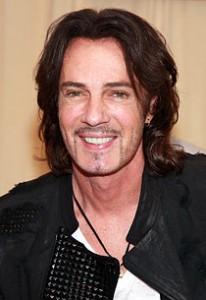 Rick Springfield, singer/actor, will be signing copies of “Magnificent Vibration” at the following locations:

Rick Springfield (born Richard Lewis Springthorpe; 23 August 1949) is an Australian musician, singer-songwriter, and actor. He was a member of the pop rock group Zoot from 1969 to 1971, then started his solo career with his début single “Speak to the Sky” reaching the top 10 in Australia in mid-1972, when he relocated to the United States. He had a No. 1 hit with “Jessie’s Girl” in 1981 in both Australia and the US, for which he received the Grammy Award for Best Male Rock Vocal Performance. He followed with four more top 10 US hits, “I’ve Done Everything for You”, “Don’t Talk to Strangers”, “Affair of the Heart” and “Love Somebody”. His two US top 10 albums are Working Class Dog (1981) and Success Hasn’t Spoiled Me Yet (1982). As an actor, he portrayed Dr. Noah Drake on the daytime drama General Hospital, from 1981 to 1983 and during 2005 to 2008 and 2012, returning in 2013 for the show’s 50th anniversary with son and actor Liam Springthorpe. In 2010, Springfield published his autobiography, Late, Late at Night: A Memoir. 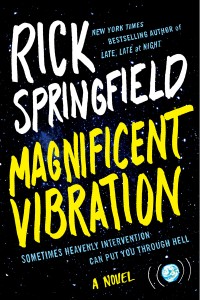 Why are we here? What is love? Is there a loch ness monster? Does God send text messages?

After stealing a mysterious self-help book called Magnificent Vibration: Discover Your True Purpose from a bookstore, Bobby calls the 1-800 number scrawled inside the front cover, only to discover that he has a direct line to God. This launches Bobby on an unlikely quest, serendipitously accompanied by a breathtakingly sexy and exceedingly sharp travel companion named Alice. Together the pair sets out to find some combination of spiritual and carnal salvation—and possibly save the planet.

By turns hilarious, poignant, over-the-top, and deeply meaningful, Magnificent Vibration is a highly original novel about the biggest questions one man—or mankind—has ever asked.