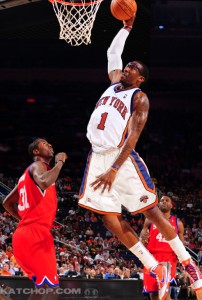 Stoudemire played high school basketball for five different schools, ultimately graduating from Cypress Creek High School in Orlando, Florida and declaring for the NBA draft as a prep-to-pro player. He won several prep honors, including being selected as Florida’s Mr. Basketball. The Phoenix Suns selected him as the ninth overall pick in the first round of the 2002 NBA Draft. He would spend eight seasons with them before signing with the New York Knicks.

Listed at 6 feet 11 inches (211 cm) and 245 pounds (111 kg), the highly athletic Stoudemire has suffered from chronic knee problems, including undergoing microfracture surgery on his knees. In spite of this he won the 2003 NBA Rookie of the Year Award, made six appearances in the NBA All-Star Game, was a first-team All-NBA selection in 2007, and won a bronze medal with the United States men’s national basketball team at the 2004 Olympic Games.

His off-court ventures include a record label, a clothing line, acting and a series of children’s books for Scholastic Press.

Stoudemire’s first name had previously been listed in the Phoenix Suns media guide as Amaré or Amare, but it was changed to Amar’e in October 2008. Stoudemire told NBA.com that his name had always been spelled Amar’e, but the media had been spelling it incorrectly since he joined the NBA. 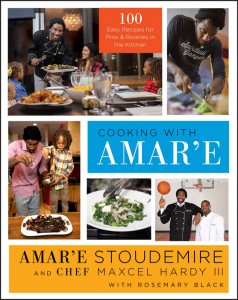 New York Knicks captain Amar’e Stoudemire may be on fire when he’s on the court, but the nearly seven-foot-tall hoops star didn’t know the first thing about lighting a fire. When his personal chef Maxcel Hardy began giving him informal cooking lessons, the six-time NBA All-Star learned to become a comfortable, experienced cook able to whip up tasty, healthy dishes for his family.

Cooking with Amar’e is an engaging chronicle of their informal sessions—a unique, collaborative cookbook featuring stories, recipes, tips, advice, and instructions on cooking techniques, equipment, shopping, party planning, and preparation for home cooks of all levels. Comprehensive and convenient, it allows beginners and practiced cooks to hone their kitchen skills and master dishes at their own pace.

Here are more than 100 healthy recipes the whole family can enjoy, that blend French, Southern, Asian, and Caribbean traditions and flavors, and use ingredients from the local grocery store. In addition to these delicious dishes—some created by Hardy for his many celebrity clients and others based on the traditional Southern dishes both men enjoyed growing up—this straightforward guide is filled with savory personal anecdotes, from humorous stories of working together as Amar’e learned to cook, to Amar’e and Maxcel’s personal reminiscences.

Designed in an easy-to-follow and engaging format, illustrated with 75-100 full color photos, this practical and fun cookbook is sure to become a trusted favorite.