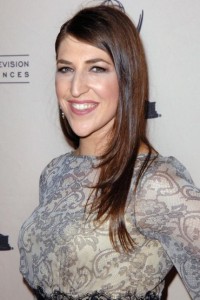 Mayim Bialik, star of “Blossom” and “Big Bang Theory”, would love to sign autographs for you of her upcoming release “Mayim’s Vegan Table” at the following locations:

Mayim Hoya Bialik (/?ma??m bi???l?k/; born December 12, 1975) is an American actress widely known for her roles as Blossom Russo on NBC’s Blossom (1990–1995), and currently as Amy Farrah Fowler on CBS’s The Big Bang Theory, for which she was nominated twice for the Primetime Emmy Award for Outstanding Supporting Actress in a Comedy Series.

Bialik was born in San Diego, California, the daughter of Barry Bialik and Beverly (née Winkelman). Her grandparents emigrated from Poland, Czechoslovakia, and Hungary in the late 1930s. Hayim Nahman Bialik, Israel’s national poet, was Mayim Bialik’s great-great-grandfather’s uncle. Bialik was raised in Reform Judaism. Her given name means “water” in Hebrew.
Bialik attended Walter Reed Junior High School in North Hollywood, California. At the end of Blossom, she chose to attend UCLA, although she also had been accepted to both Harvard and Yale. She stated that she wanted to stay close to her parents and did not want to move to the East Coast. She earned degrees in neuroscience, Hebrew and Jewish studies, and went on to the PhD program in neuroscience.
She took a break from studies in 2005 to return to acting. Bialik completed her PhD in 2007. Her dissertation was an investigation of hypothalamic activity in patients with Prader–Willi syndrome.

Bialik married Michael Stone on August 31, 2003, in a Victorian-themed ceremony with traditional Jewish customs. Stone, born into a Mormon family, converted to Judaism; several years later, his mother converted to Judaism as well. Bialik and Stone have two sons together: Miles, born in 2005, and Frederick, born in 2008. In 2010, Bialik returned to television so that she could spend more time with her children and stated “I’m glad that I completed my PhD and I’m very proud of it, but the life of a research professor would not have suited my needs in terms of what kind of parenting I wanted to do.” In November 2012, Bialik and Stone announced that they were divorcing, citing irreconcilable differences. The divorce was finalized in May 2013.
In a 2012 interview, Bialik stated that she would call herself “aspiring Modern Orthodox”. She has appeared in several YouTube cameos as Blossom and Amy Farrah Fowler asking questions about Jewish beliefs. The videos are produced by Allison Josephs, Bialik’s Judaism study partner, whom she met with the help of Partners in Torah.
Bialik is a celebrity spokesperson for the Holistic Moms Network.
Bialik is a vegan and a founding member of the Shamayim V’Aretz Institute.
Bialik spoke at the 2011 Penn State Lehigh Valley graduation in Bethlehem, Pennsylvania. 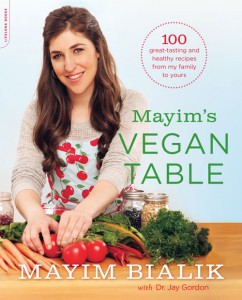 Many of us know the struggles and challenges of raising our children to be healthy eaters when the outside world presents all sorts of conflicting messages. Mayim Bialik has teamed up with Dr. Jay Gordon to help parents face those challenges head on. Interested in providing nutritious, delicious meals for your kids? Take their advice. Because, believe it or not, your child will eat greens if you just try a fruit-sweetened green smoothie.

From dispelling myths about a vegan diet to tackling the food pyramid, Bialik and Gordon outline how your family can eat healthier even on your busiest days. But don’t mistake this for a diet diatribe: this lively book offers 125 fuss-free recipes that will please everyone from the pickiest eaters to the savviest palates. This comprehensive guide helps parents set a foundation for lifelong healthy and delicious eating. Her book is available to pre-order here on Amazon!