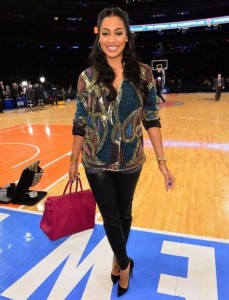 La La Anthony, MTV VJ and actress, will be signing copies of her upcoming release “The Love Playbook” at the following locations:

Alani “La La” Anthony (née Vazquez; born June 25, 1979) is an American disc jockey, television personality, and actress. Born and raised in Brooklyn, New York, she attended Piscataway High School as a teenager. In the early 2000s, Vazquez came to prominence as an MTV VJ on Total Request Live.
Vazquez, along with her brother and two sisters, were born in Brooklyn. Her parents are both Puerto Rican, and she has described herself as “Afro-Puerto Rican”. As a child, Vazquez was involved in many activities, but music was her main interest.
In Atlanta, Vazquez worked as a programming assistant at WHTA radio. While a student in high school, she received her first big break with her debut in a radio show, alongside Ludacris, called Future Flavas. After working for some time at the station, she decided to relocate to Washington, D.C., where she attended Howard University and studied Communications. While at Howard, she worked as a disc jockey at WHUR, the campus radio station.
In 1999, she moved to Los Angeles, California, and went to work at KKBT radio. There, she was noticed by MTV and was invited to audition, although was not called back until a year after the audition. She was the co-host of MTV’s Direct Effect and Total Request Live. She has also hosted the reunion specials for all seasons of VH1’s Flavor of Love, both seasons of I Love New York, the first season of Real Chance of Love, the first season of Flavor of Love Girls: Charm School and For the Love of Ray J. In addition, she often introduced stories on MTV’s High School Stories and she appeared as a dean on VH1’s Charm School with Ricki Lake.
Vazquez made her film debut in 2001 in Two Can Play That Game. Her other film credits include Urban Massacre (2002), Monster Island (2004), You Got Served (2004) and Think Like a Man (2012).
On February 2, 2012, she launched MOTIVES by La La, at the Market America World Conference at the American Airlines Arena in Miami, Florida. Inspired to create a cosmetic line for women of color ranging in color variation, her cosmetic line consists of multiple products for face, cheeks, eyes, lips and nails. Each products name was composed from a life experience. All products are mineral based and prices range from $16 to $40.
LaLa launched her personal website, IamLaLa.com, in April 2012. The site is an interactive community for her fans and friends focusing on fashion, hair and beauty, pop culture, family life, and relationships. 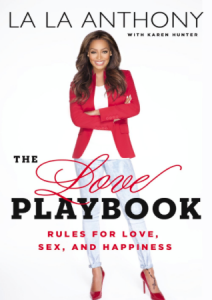 Star of VH1’s La La’s Full Court Life, actress, entrepreneur, and wife of New York Knick’s star Carmelo Anthony – La La Anthony found love and success on her own terms. But before La La was a strong woman balancing a growing career, a high-profile marriage, and motherhood, she suffered through bad dates, tumultuous relationships, and backstabbing friends. She learned the hard way how to rise above it all to live the life she loves. And now, for the first time, she channels her most rewarding and challenging lessons into a personal playbook, providing empowering, go-to advice for healthy relationships and a happy life.

With her attitude of no nonsense and no judgments, La La is the one her friends come to for relationship advice. She tells it like it is, sharing her personal experiences and revealing intimate details about her marriage and past relationships, to illustrate what she’s learned the hard way.

In The Love Playbook, La La provides play-by-play plans—from teaching your man the right way to treat a woman to dealing with a fickle friend, and, of course, how to snag a baller. With personal secrets and empowering advice, you will learn how to take control of your relationships, rise above adversity, and live your life by your rules.

THE LOVE PLAYBOOK is the everywoman guide to finding love, building healthy relationships, and staying true to yourself along the way. Her book is available to pre-order here on Amazon!