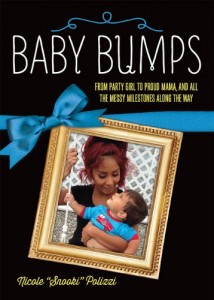 Nicole “Snookie” Polizzi, star of “Jersey Shore”, is going to be signing copies of her new book “Baby Bumps” at the following location:

Nicole Elizabeth “Snooki” Polizzi (born November 23, 1987) is an American reality television personality who is best known for being a cast member of the MTV reality show Jersey Shore and currently stars in Snooki & JWoww. Since the show’s debut in 2009, Polizzi has gained popularity by appearing on talks shows including The View, The Ellen DeGeneres Show, Jimmy Kimmel Live!, Late Show with David Letterman and The Wendy Williams Show, as well as the wrestling program WWE Raw. She is also one of the highest paid reality stars, earning $150,000 per episode as of season five.

Polizzi was born in Santiago, Chile. She was adopted when she was six months old and was raised by Italian American parents. Her father is a volunteer firefighter and auto-salvage supervisor and her mother is an office manager. Polizzi received her nickname, Snooki, in middle school when her friends named her after “Snookie”, a male character in Save the Last Dance, because she was the first of her friends to kiss a boy. She grew up and attended school in Marlboro, New York, where she was a cheerleader. During high school, she suffered from an eating disorder, at one point weighing 80 pounds (36 kg). Polizzi attended community college after graduating from Marlboro High School, where she studied to become a veterinary technician.
In March 2012, Polizzi announced her engagement to Jionni LaValle. Polizzi gave birth to the couple’s first child, Lorenzo Dominic LaValle, on August 26, 2012.
Polizzi lives in Marlboro, New York. She identifies as bisexual.
Polizzi appeared on the front page of the March 2013 issue of Us Weekly, claiming to have lost 42 pounds post pregnancy.

The greatest thing Nicole Polizzi, aka “Snooki,” ever did was by accident. But her son, Lorenzo, was never a mistake. When she and her boyfriend, Jionni, found out she was knocked up, they weren’t married or engaged. She was only twenty-four and living with her parents—and she had zero baby experience. With a reckless, party girl TV persona to deal with, she had a lot to learn and discover in becoming a mother.
In this funny and frank book, Nicole shares her experiences, everything from the first sonogram to the nipple-cracking shock of breastfeeding. In each chapter, she tells the unvarnished truth about pregnancy symptoms (“The High Price of Gas”), the ridiculousness of her baby registry (“Butt Paste and Boogie Wipes”) and the lowdown on postpartum life (“Shit Happens”). There’s a ton of useful information, including a list of must-have baby products, MILF style tips, how to keep “I’m a whale” preggers bad body image in check, and how she got into the best shape of her life within six months of giving birth. Although Nicole had to give up partying, she’s embracing motherhood the only way she knows how: with a fun-loving attitude—and lots of leopard print!
Her book is available to pre-order here on Amazon!