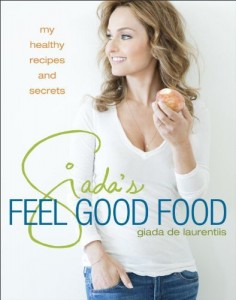 Food Network’s most beautiful star reveals her secrets for staying fit and feeling great in this gorgeous, practical book with healthy recipes including nutritional information, and personal lifestyle and beauty tips.

Finally answering the question her fans ask most often, “How do you stay so trim?,” Giada De Laurentiis shares the delicious easy recipes and tips she uses to maximize energy and remain fit. Here are 120 recipes for breakfasts, juices, lunches, snacks, dinners, and desserts that can be combined into a month of delicious feel-good meals. So that everyone can enjoy these dishes, many are gluten-free, dairy-free, vegetarian, and/or vegan, with helpful icons to call them out—and, for the very first time, each recipe includes a calorie count and nutritional analysis. Special sections delve into Giada’s everyday life, including her beauty and exercise routines, how she satisfies sugar fixes, what’s always in her bag, and her ordering tips for eating in restaurants. With 100 color photographs, Giada’s Feel Good Food is a beautiful guide to staying on track while still eating everything and enjoying life to its fullest.

You can pre-order her book here on Amazon.

De Laurentiis studied at Le Cordon Bleu in Paris, with aspirations of becoming a pastry chef; she is a self-proclaimed chocoholic. After returning to the United States, she became a professional chef working in several Los Angeles restaurants, notably the Wolfgang Puck-owned Spago. She later worked as a food stylist and was contacted by the Food Network after styling a piece in Food & Wine Magazine in 2002. 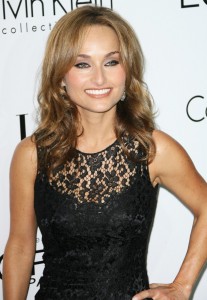 Starting in 2003, her Emmy Award-winning daytime cooking show, Everyday Italian, featured quick, healthy and satisfying Italian dishes. On her Chefography, a Food Network biography program, she admitted that she never wanted to be in her “family business” of show business. She felt very uncomfortable in front of the camera when she first began hosting Everyday Italian, but has since become more relaxed and open on air. When the program first aired, the Food Network received mail accusing the network of hiring a model or actress pretending to cook instead of a real chef. She has since become well known for her trademark over-enunciation of Italian words within English sentences.
De Laurentiis began hosting Behind the Bash in October 2006. The program examines the catering process behind big event extravaganzas such as the Grammy Awards. In January 2007, a third De Laurentiis-hosted show, Giada’s Weekend Getaways, debuted on Food Network. On this show, De Laurentiis travels to a featured locale (such as Seattle, South Beach, San Francisco, Napa, and Jackson Hole, Wyoming) and visits her favorite local culinary destinations. On a November 2006 episode of Iron Chef America, De Laurentiis and Bobby Flay competed against, and were defeated by Rachael Ray and Mario Batali.
In 2007, De Laurentiis appeared as a presenter on the inaugural Food Network Awards. In June 2007, she hosted a two-part Food Network special entitled Giada in Paradise, featuring the two locales of Santorini, Greece and Capri, Italy. De Laurentiis also made several appearances as a guest judge on the third season of The Next Food Network Star, which aired in 2007. In 2008, she won a Daytime Emmy Award for Outstanding Lifestyle Host.
In 2008, De Laurentiis and the Barilla Group, launched an Italian gourmet line under the Academia Barilla name—Barilla’s first-ever gourmet celebrity product line. That same year, Giada at Home premiered, showing Giada in a kitchen preparing meals and parties for family and friends. The show is shot on a set that is very similar to her own home. Giada joined fellow chef Bobby Flay as a judge in season 7 of Food Network Star and took on a new role in season 8 as a team leader of five cooks competing against Bobby Flay’s and Alton Brown’s respective teams.
In 2009, De Laurentiis became the voice of “Paulette”, a character on the animated children’s show Handy Manny.
In early 2010, De Laurentiis came out with a line of kitchen supplies, exclusively for Target. That same year, CafeMom ranked her as #6 in their yearly “Sexiest Moms Alive” list. In June, 2010 De Laurentiis became a regularly appearing mentor to the finalists on the popular Food Network competition show The Next Food Network Star.
De Laurentiis, dubbed a “petite powerhouse” by Town & Country magazine, stands “just under five foot two”
.