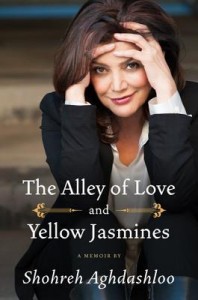 Shohreh Aghdeshloo, Oscar nominated actress, will be signing copies of her book “The Alley of Love and Yellow Jasmines” at the following location:

Oscar nominee and Emmy Award–winning actress Shohreh Aghdashloo shares her remarkable personal journey—from a childhood in the Shah’s Iran to the red carpets of Hollywood—in The Alley of Love and Yellow Jasmines, a dazzling memoir of family, faith, and hope.

When Shohreh Aghdashloo was growing up in Teheran, stardom was a distant dream, especially since her parents had more practical plans for their daughter…

When revolution swept Iran in 1978, the Ayatollah Khomeini’s religious regime brought stifling restrictions on women and art. Shohreh Aghdashloo seized the moment and boldly left her husband for Europe and eventually, America, a vastly different culture.

Shohreh Aghdashloo writes poignantly about her struggles as an outsider in a new culture—as a woman, a Muslim, and a Persian—adapting to a new land and a new language, and shares behind-the-scenes stories about what it’s really like to be an actress in Hollywood.

The Alley of Love and Yellow Jasmines includes original color photographs from the author. You can order her book here on Amazon. 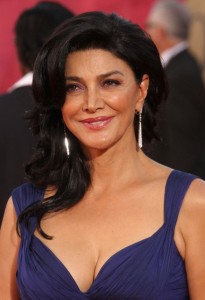 Shohreh Aghdashloo was born in Tehran, Iran, on May 11, 1952. In the 1970s at age 20, she achieved nationwide stardom in her homeland of Iran, starring in some prominent pictures such as The Report (1977) (The Report) directed by the renowned Abbas Kiarostami, which won critics awards at the Moscow Film Festival. In 1978, she won wider acclaim and established herself as one of Iran’s leading ladies with Desiderium (1978) (Broken Hearts) directed by the late Ali Hatami.

During the 1978 Islamic revolution, Aghdashloo left Iran for England, to complete her education. Her interest in politics and her concern for social injustice in the world led her to earn a B.A. degree in International Relations.

She continued to pursue her acting career, which eventually brought her to Los Angeles in 1987. She went on to marry actor/playwright Houshang Touzie, performing in a number of his plays, successfully taking them to national and international stages. However, it was not easy getting work in Hollywood as a middle eastern actress with an accent; she had roles in some decent, though not great, films, including Twenty Bucks (1993), Surviving Paradise (2000) and Maryam (2002). She had to wait quite some time to get a “Hollywood” break.

And finally, years after having read the acclaimed novel “House of Sand and Fog,” Dreamworks were in the process of bringing the story to the big screen. After having cast Ben Kingsley (as Massoud Amir Behrani) and Jennifer Connelly in the lead roles, they were looking for a relatively unknown Iranian actress to play Kingsley’s wife, Nadi. Shohreh Aghdashloo was duly cast. She stole the limelight and earned herself an Academy award nomination as best supporting actress amongst many other prestigious awards, including the Independent spirit award as best supporting actress in a feature film, The New York and Los Angeles film critics award and others.