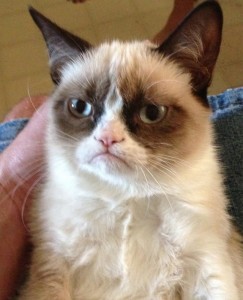 Grumpy Cat, internet sensation, will be paw printing copies of “Grumpy Cat” at the following location:

Internet sensation Grumpy Cat’s epic feline frown has inspired legions of devoted fans. Celebrating the grouch in everyone, the Grumpy Cat book teaches the fine art of grumpiness and includes enough bad attitude to cast a dark cloud over the whole world. Featuring brand new as well as classic photos, and including grump-inspiring activities and games, Grumpy Cat delivers unmatched, hilarious grumpiness that puts any bad mood in perspective. You can order the book here on Amazon.

Ben Lashes is Grumpy Cat’s manager who also represents Keyboard Cat and Nyan Cat. Bundesen took a leave of absence from her day job at Red Lobster to manage Grumpy Cat’s schedule and Bryan manages her website, Facebook, YouTube and Twitter. According to the U.S. Patent and Trademark Office database, “Grumpy Cat Inc. Corp. Ohio” applied to trademark “Grumpy Cat” and an image of her at the end of January 2013. Licensed merchandise like t-shirts and mugs are advertised on the website and sold at Hot Topic. Plush toys are in the works. Bryan said that by March 2013 they earned “mid-five figures” and “low-six-figure” by May 2013. The corporation has a estimated value of $1 million. Grenade Beverage LLC makes Grumpy Cat “Grumpuccino” iced coffee beverages.