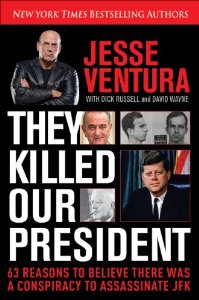 Jesse Ventura, wrestler and politician, signing copies of They Killed Our President

Read all the evidence from the biggest conspiracy in American history!

Unless you’ve been living under a rock for the past fifty years, you’re aware of the many hypotheses that the assassination of President John F. Kennedy was not done by one man. Whether you’ve read one or a dozen of the books on this topic, there’s no way to fully grasp the depth of this conspiracy.
For the first time ever, New York Times bestselling authors Jesse Ventura and Dick Russell have teamed up with some of the most respected and influential assassination researchers to put together the ultimate compendium that covers every angle—from the plot to the murder—of JFK. They Killed Our President will not only discuss the most famous of theories, but will also bring to light new and recently discovered information, which 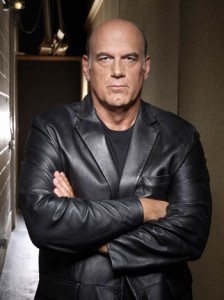 together shows that the United States government not only was behind this egregious plot, but took every step to make sure that the truth would not come out.

With 2013 marking the fiftieth anniversary of JFK’s assassination, this is the perfect time for They Killed Our President to be available to readers. The research and information in this book are unprecedented, and there’s nobody better to bring this to everyone’s attention than the former governor of Minnesota and US Navy SEAL, Jesse Ventura.

James George Janos (born July 15, 1951), better known by his stage name, Jesse Ventura, is an American politician, actor, author, veteran, and former professional wrestler who served as the 38th Governor of Minnesota from 1999 to 2003.
Born James George Janos, Ventura served as a U.S. Navy Underwater Demolition Team member during the Vietnam War. After leaving the military, he embarked on a professional wrestling career from 1975 to 1986, taking the stage name Jesse “The Body” Ventura. He had a long tenure in the World Wrestling Federation as a performer and color commentator, and was inducted into the company’s Hall of Fame in 2004. While involved with wrestling, Ventura also pursued a film career, appearing in films such as 1987’s Predator.
Ventura first entered politics as Mayor of Brooklyn Park, Minnesota from 1991 to 1995. Four years after his mayoral term ended, Ventura was the Reform Party candidate in the Minnesota gubernatorial election of 1998, running a low-budget campaign centered on grassroots events and unusual ads that urged citizens not to “vote for politics as usual”. Ventura’s campaign was successful, with him narrowly and unexpectedly defeating both the Democratic and Republican candidates. The highest elected official to ever win an election on a Reform Party ticket, Ventura left the Reform Party a year after taking office amid internal fights for control over the party.
As governor, Ventura oversaw reforms of Minnesota’s property tax as well as the state’s first sales tax rebate. Other initiatives taken under Ventura included construction of the METRO Blue Line light rail in the Minneapolis–Saint Paul metropolitan area, and cuts in income taxes.
Ventura left office in 2003, deciding not to run for reelection. After leaving office, Ventura became a visiting fellow at Harvard University’s John F. Kennedy School of Government in 2004. He has since also hosted a number of TV shows and has written several political books. Ventura currently lives in both Dellwood, Minnesota, and Cabo San Lucas, Mexico. You can order the book here on Amazon.