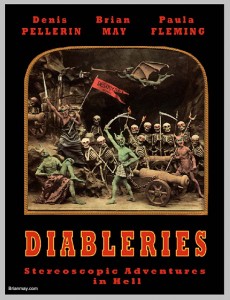 Brian May, guitarist for Queen, will be signing copies of “Diableries” at the following location:

Brian May, founding member and lead guitarist of Queen, is one of the world s foremost collectors of Victorian stereo cards. The subject of this first book from the London Stereoscopic Company is amongst the most famous sets of stereo cards ever published – the Diableries ( Devilments ), which were originally published in France around 1860. Using the 3-D viewer to view the stereo cards, which have been meticulously restored and printed, the reader is transported back in time and escapes into a parallel universe set in hell, with the devil and his henchmen participating in activities similar to those on Earth, and having a lot of fun. There are 180 scenes in total. The stereo views were made by photographing extraordinarily detailed and beautifully created miniature sculptures. At that time, the emperor, Napoleon III, ruled with an iron fist, and every single engraving, woodcut, lithograph or photograph had to be submitted to the censors, and registered with the police. So in fact there is a deeper purpose to the cards: they are packed with dangerously satirical references mocking Napoleon s regime, and the sculptors and photographers risked imprisonment to strike a blow for the citizens of France. The traditional symbolic use of the devil to control the people is dramatically turned back 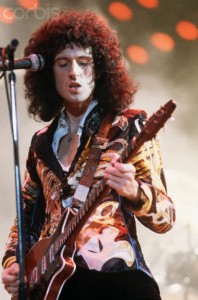 on itself to satirize the abusers of the power. This brutal period in French history is not taught in French schools even today. The text unravels the mysteries in the historical context for the modern viewer to enjoy. The Diableries are impudent, funny, sad, riotously inventive, satirical and dangerously seditious. Their wickedness awaits you! .

Brian Harold May CBE (born 19 July 1947) is an English musician, singer, songwriter and astrophysicist who achieved international fame as the guitarist of Queen. As a guitarist he uses a home-built guitar, “Red Special”. Queen’s albums include numerous May compositions, including “Tie Your Mother Down”, “I Want It All”, “We Will Rock You”, “Fat Bottomed Girls” and “Who Wants to Live Forever”.
He was appointed a Commander of the Most Excellent Order of the British Empire (CBE) in 2005 for “services to the music industry and for charity work”. May earned a Ph.D in astrophysics from Imperial College in 2007 and was Chancellor of Liverpool John Moores University from 2008 to 2013. He resides in Windlesham, Surrey. He is an active animal rights advocate and was appointed a vice-president of animal welfare charity the RSPCA in September 2012.
In 2005, a Planet Rock poll saw May voted the 7th greatest guitarist of all time. He was ranked at No. 26 on Rolling Stone magazine’s list of the “100 Greatest Guitarists of All Time”. In 2012, May was ranked the 2nd greatest guitarist of all time by a Guitar World magazine readers poll.