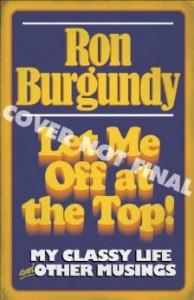 Will Ferrell (as Ron Burgandy), will be signing copies of Let Me Off at the Top! My Classy Life at the following location:

Ron Burgundy is known to all as the lead anchorman of San Diego’s award-winning Action 4 News Team and anchor of the first 24-hour news channel, GNN (Global News Network), but few know the real man behind the news desk. In LET ME OFF AT THE TOP! My Classy Life and Other Musings he will share never-before-told stories of his childhood and the events that led him to choose a career in the news business. He will offer a rare glimpse behind the camera into the real life of a man many consider to be our greatest living news anchor. In his own words, he will share personal anecdotes about the women in his life, about his dog, Baxter, and his legendary news team. Along the way, he’ll also give sage advice on a variety of topics that matter most to him. The long wait is over. Ron Burgundy pulls no punches in this widely anticipated, fully authorized tell-all autobiography. 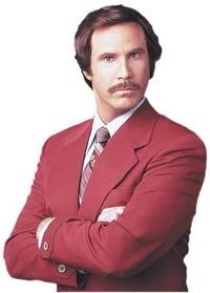 A graduate of the University of Southern California, Will Ferrell became interested in performing while a student at University High School in Irvine, California, where he made his school’s daily morning announcements over the public address system in disguised voices. He started as a member of the Los Angeles comedy/improvisation group The Groundlings, where fellow cast members Ana Gasteyer, Maya Rudolph and former “Saturday Night Live” (1975) repertory players such as Laraine Newman, Jon Lovitz and Phil Hartman began their careers. It was there he met Chris Kattan and the two became good friends and both went on to “Saturday Night Live” (1975) later. He has also appeared on several television programs, including “Strangers with Candy” (1999), “Grace Under Fire” (1993) and “Living Single” (1993) during his time at The Groundlings. Will also lent his voice to the armless and legless dad of cartoon family “The Oblongs”.