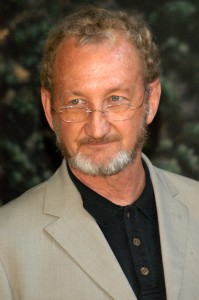 Robert Englund hosts a screening of “Nightmare on Elm Street” and will be signing autographs on the following dates and times:

American leading actor of a number of horror films, probably best known as Freddy Krueger in A Nightmare on Elm Street (1984) and all of its sequels. Englund became a cult favorite after that film but had started working in the 1970s. He was cast as a sex-crazed maniac in Eaten Alive (1977) by Tobe Hooper, who also directed The Texas Chain Saw Massacre (1974). Englund went on to a number of low-budget horror films, including Galaxy of Terror (1981) and The Fifth Floor (1978). Then came his big break as Freddy Kruger in “Elm Street”, the man of nightmares with the disfigured face and a red striped shirt with his right hand as razor-sharp knives. The film was directed by Wes Craven and was so successful for New Line Cinema that the company had Englund reprise Freddy in all of the subsequent – and wildly successful – sequels. He played the title role in the semi-remake of the horror film classic, The Phantom of the Opera (1989) for 21st Century Film Corporation. Englund has frequently worked with Hooper, in such films as Night Terrors (1993) and The Mangler (1995). 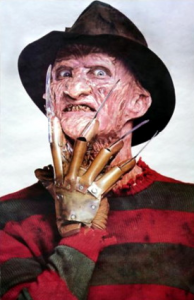 A Nightmare on Elm Street

A Nightmare on Elm Street is a 1984 American slasher film written and directed by Wes Craven, and the first film of the Nightmare on Elm Street franchise. The film stars Heather Langenkamp, John Saxon, Ronee Blakley, Amanda Wyss, Jsu Garcia, Robert Englund, and Johnny Depp in his feature film debut. Set in the fictional Midwestern town of Springwood, Ohio, the plot revolves around several teenagers who are stalked and killed in their dreams by Freddy Krueger. The teenagers are unaware of the cause of this strange phenomenon, but their parents hold a dark secret from long ago.

Craven produced A Nightmare on Elm Street on an estimated budget of just $1.8 million, a sum the film earned back during its first week. An instant commercial success, the film’s total United States box office gross is $25.5 million. A Nightmare on Elm Street was met with rave critical reviews and went on to make a very significant impact on the horror genre, spawning a franchise consisting of a line of sequels, a television series, a crossover with Friday the 13th, beyond various other works of imitation, a remake of the same name was released in 2010.

The film is credited with carrying on many tropes found in low-budget horror films of the 1970s and 1980s, originating in John Carpenter’s 1978 horror film Halloween, including the morality play that revolves around sexual promiscuity in teenagers resulting in their eventual death, leading to the term “slasher film” The Texas Chain Saw Massacre of Tobe Hooper.

Critics and film historians argue that the film’s premise is the question of the distinction between dreams and reality, which is manifested in the film through the teenagers’ dreams and their realities. Critics today praise the film’s ability to transgress “the boundaries between the imaginary and real”, toying with audience perceptions