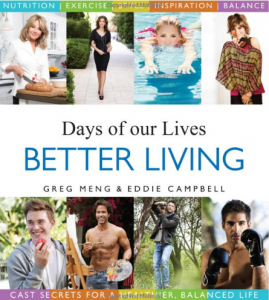 The stars of “The Days Of Our Lives”, including Dierdre Hall, Chandler Massey, James Scott, & Kristian Alfonso, will be signing copies of “Better Living” at the following location:

The word “balanced” has been defined as “possessing good judgment, well-grounded, wise.” Most of all, having balance in your life equates to having a satisfying and rewarding existence. The lavishly illustrated Days of our Lives Better Living reaches into the private lives of the beautiful cast members and reveals some of their “secrets” for how they have managed to create unique, balanced lifestyles that allow them to look and feel their best anytime, anywhere.

The five sections of this inspiring book-Nutrition, Exercise, Style, Inspiration and Balance-are packed with full-color photos, recipes, stories and valuable advice from current and former cast members on various aspects of their lives.

“Fashion truly is my passion! I love the expression of it. Don’t be afraid to go with bold accessories. They can make or break an outfit.”-Lisa Rinna

“Growing my own fruits and vegetables is the most effective way I have improved the meals that land on my table.”-Deirdre Hall

Discover how to…
• Get energized with the Brazilian Bombshell Smoothie
• Switch up your boring gym routine with dance, martial arts, hiking and more
• Master the secret of layering clothing and accessories to polish your personal style
• Accept “the middle path”-and learn to let stress go
• Do what you love without feeling guilty
• And much more!

Whether you are interested in discovering the secrets of your favorite current and former cast members (including Deirdre Hall, Molly Burnett, Suzanne Rogers, Eric Martsolf, Galen Gering, James Scott, Austin Peck, Kristian Alfonso, Lauren Koslow, and more!) or looking for tips and tricks to improve your own lifestyle, Days of our Lives Better Living shows that healthy change is attainable and offers fun and easy ways to help you lead a happy, fulfilling life. 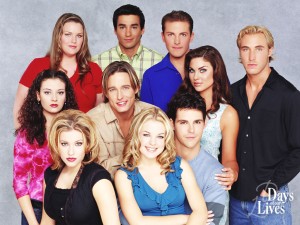 Days of our Lives (often abbreviated to DOOL or Days) is a daytime soap opera broadcast on the NBC television network. It is one of the longest-running scripted television programs in the world, airing nearly every weekday in the United States since November 8, 1965. It has since been syndicated to many countries around the world. It also rebroadcasts on SOAPnet with the most recent NBC episode airing weeknights at 8 and 11 p.m. (ET/PT). The series was created by husband-and-wife team Ted Corday and Betty Corday. Irna Phillips was a story editor for Days of our Lives and many of the show’s earliest storylines were written by William J. Bell. The show was renewed through September 2014.

Due to the series’ success, it was expanded from 30 minutes to 60 minutes on April 21, 1975. Since that date, the mid-show bumper, featuring the phrase “We will return for the second half of Days of our Lives in just a moment”, was aired with every episode and voiced by the series’ original star, Macdonald Carey.

The series focuses on its core families, the Hortons and the Bradys. Several other families have been added to the cast, and many of them still appear on the show. Frances Reid, the matriarch of the series’ Horton family remained with the show from its inception to her death on February 3, 2010. Suzanne Rogers celebrated 39 years on Days of our Lives this year, appearing on the show more or less since her first appearance in 1973. Susan Seaforth Hayes is the only cast member to appear on Days of our Lives in all six decades it has been on air.

Days of our Lives aired its 10,000th episode on February 21, 2005 and its 12,000th episode aired on January 11, 2013. The show was given the title of most daring drama in the seventies due to covering topics other soaps would not dare to do. The show’s executive producer is Ken Corday, and co-executive producers are Greg Meng and Lisa de Cazotte. Days of our Lives is the most widely distributed soap opera in the United States. The original title sequence voiced by MacDonald Carey is still used to this day. The show has also been parodied by the television sitcom Friends, some cast members made crossovers on the show. Such would include Kristian Alfonso, Roark Critchlow, Matthew Ashford, Kyle Lowder, and Alison Sweeney. The show has high profile fans such as actress Julia Roberts, and the late Supreme Court justice Thurgood Marshall.

The show was officially “rebooted” (dubbed Days of our Lives 2.0) on September 26, 2011, in an effort to gain back its lapsed audience, appeal to long-term loyal fans, begin new stories, and boost ratings.