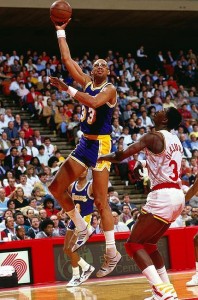 Kareem Abdul-Jabbar, NBA legend, will be signing copies of Sasquatch in the Paint at the following location:

Kareem Abdul-Jabbar (born Ferdinand Lewis Alcindor, Jr., April 16, 1947) is a retired American professional basketball player. He is the leading scorer in the history of the National Basketball Association (NBA). During his career, Abdul-Jabbar was a record six-time NBA Most Valuable Player (MVP), a record 19-time NBA All-Star, a 15-time All-NBA selection, and an 11-time NBA All-Defensive Team member. A member of six NBA championship teams, Abdul-Jabbar twice was voted NBA Finals MVP. In 1996, he was named one of 50 Greatest Players in NBA History.
In college at UCLA, he played on three consecutive national championship teams, and his high school team won 71 consecutive games. During his NBA career, he played with the Milwaukee Bucks and Los Angeles Lakers. At the time of his retirement, Abdul-Jabbar was the NBA’s all-time leader in points scored, games played, minutes played, field goals made, field goal attempts, blocked shots, defensive rebounds, and personal fouls. In 2008, ESPN named him the “greatest player in college basketball history.” Others, including Pat Riley and Isiah Thomas, have argued that he is the greatest basketball player of all time.
Abdul-Jabbar has also been an actor, a basketball coach, and a best-selling author. In 2012, he was selected by Secretary of State Hillary Clinton to be a U.S. global cultural ambassador. 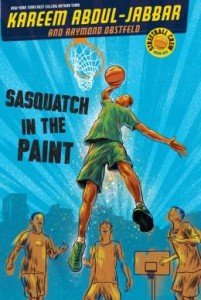 Theo Rollins is starting eighth grade six inches taller, and his new height is making everyone expect more from him. Coach Mandrake wants to transform him from invisible science geek into star basketball player, even though Theo has little experience with the game. When Theo tries to hone his skills by playing pick-up ball in the park, kids are eager to include him at first; then they quickly see that he has no control of his gangly body. A girl named Rain even dubs him “Sasquatch.” To make matters worse, all his time spent on training is starting to hurt his science club’s chances of winning the “Aca-lympics,” the school’s trivia competition. Just when Theo thinks he can’t handle any more pressure, he’s accused of stealing. Can he find the real thief before he is kicked off the basketball and science club teams, or will his attempt at sleuthing be yet another air ball?

Loosely based on challenges that NBA legend Kareem Abdul-Jabbar faced while growing up, Sasquatch in the Paint is a slam dunk for fans of basketball action and absorbing mysteries.