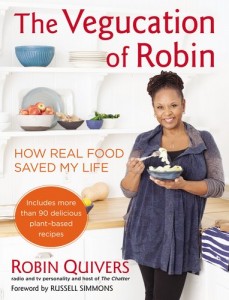 Known for her levelheaded, deadpan comebacks to Howard Stern’s often outrageous banter, Robin Quivers is a force of nature. Yet few people know about her struggles with food—especially the high-fat, high-sugar, high-cholesterol, highly addictive foods that doomed many of her relatives to obesity, diabetes, and heart disease. Sick and tired of being sick and tired, she knew it was time to stop her slow slide into bad health. Quivers took a stand in her personal nutrition battle and emerged victorious thanks to a plant-based diet.

On her sometimes rocky, though endearingly hysterical, path to newfound health, Quivers discovered the power of the produce aisle in changing her body and her mindset. By filling up on soul-quenching, cell-loving vegetables instead of damaging animal products and processed foods, Quivers left behind the injuries, aches, and pains that had plagued her for twenty years. Charting her inspiring road to wellness, The Vegucation of Robin describes her transformation inside and out, and, including ninety of her favorite vegan recipes, she encourages readers to join her in putting their health first.

With her signature humor and wit, Quivers builds an undeniable case that the key to living the life you’ve always wanted lies not with your doctor but in your refrigerator. Putting a new face on the pro-veggie movement, Quivers will dazzle readers who want to look good, feel good, and have fun doing it.