Emerging from the New Wave music scene of the late ‘70s, The Cars catapulted to success with the very first single—“Just What I Needed”—off of their debut album. Led by Ric Ocasek, the lead vocalist (along with Benjamin Orr), rhythm guitarist, and songwriter, The Cars became one of the most successful bands of the ‘80s—and their songs are just as beloved by fans today.

Ocasek himself has had an illustrious career beyond The Cars, from writing and performing solo work, publishing poetry in Granta and elsewhere, and producing albums by musical artists like Weezer, Hole, Guided By Voices, and Jonathan Richman. In Lyrics & Prose, Ocasek collects his lyrics together for the first time—and included throughout are Ocasek’s early handwritten notes and set lists, doodles and all. His work spans from The Cars’ self titled debut album in 1978 to Move Like This, released in 2011, as well as Ocasek’s six solo albums.

This is not merely a songbook for fans of The Cars, however: Ocasek is a versatile and affecting poet as well as songwriter, and his original verses—interspersed with album artwork and more than twenty-five beautiful black and white photographs—round out this beguiling book. 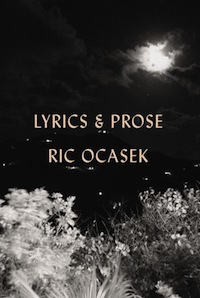