One of Comedy Central’s Top 100 Stand-Up Comedians of All Time, award-winning dramatic actor, and an internet pioneer, Kevin Pollak has done it all for thirty years and is ready to spill the beans. Best known for performances in A Few Good Men and The Usual Suspects, he shares never-before-heard stories of film legends like De Niro, Hanks, Howard, Lemon, Loren, Lucas, Martin, Mathau, Reiner, Scorcese, Singer, Willis, and more. He turned down his first invitation to do stand-up on The Tonight Show because he knew that he’d have a bigger impact if he sat next to Johnny instead of performing onstage. When he gambled for a spot on the most coveted couch in showbiz, he had no agent, no auditions, no prospects. But his gut was right: A year later, his first sit with the king of late night led to three visits a year, every year, until Carson retired. Now a new media entrepreneur, Pollak is laughing proof that you can do anything you want—except have a rational conversation with Rip Torn, who’s an evil, paranoid $#!%.

Kevin Pollak has appeared in over 65 films, including A Few Good Men, The Usual Suspects, Casino and the Grumpy Old Men franchise, in addition to numerous TV shows. Named one of Comedy Central’s Top 100 Comedians of All Time. He lives a short bike ride from Venice Beach in Southern California. 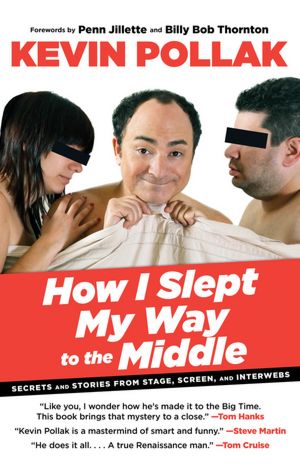