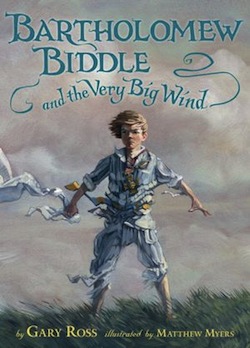 Bartholomew Biddle’s life has always been pretty ordinary, but when a huge wind blows past his window one night, he feels the call of adventure — and he can’t resist the urge to grab his bedsheet and catch a ride. Soon he’s soaring far above his little town, heading wherever the wind takes him! After spending time on an island full of pleasure-seeking pirates and at a prep school that boasts a hundred shades of gray, Bart finds himself in a mysterious cove where the wind doesn’t blow. Stuck, Bart is forced to face the fact that his flying days might be over. Will he ever get home again?

Gary Ross is a critically acclaimed screenwriter, director, and producer who has been nominated for four Academy Awards. His films include Big, Dave, Pleasantville, Seabiscuit, and The Tale of Despereaux. Most recently, he directed The Hunger Games, the first movie based on Suzanne Collins’s best-selling dystopian trilogy. He has also served as president of the Board of Commissioners for the Los Angeles Public Library, as well as on the boards of many other organizations. Bartholomew Biddle and the Very Big Wind is his first children’s book. Gary Ross lives in Los Angeles with his family.