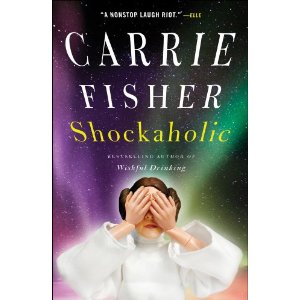 is the  new paperback release by Carrie Fisher, the American actress best known for her role on the Stars Wars film as Princess Leia. Carrie Fisher is also the author of her bestselling novel “Postcards from the Edge” and screenplay for the film of the same name. She also has an autobiography called “Wishful Drinking”.

About the new book “Shockaholic”

“Fisher is a girl who knows how to tell a story…she can make us laugh, she can make us cringe, but she can also teach us a great deal about the power of forgiveness” (People, 4 stars).

It was a roller coaster of a few years for Carrie since her Tony Award- and Emmy Award-nominated, one-woman Broadway show and New York Times bestselling book Wishful Drinking. She not only lost her beloved father, but also her once-upon-a-very-brief-time stepmother, Elizabeth Taylor. And as if that weren’t enough, she managed to lose over forty pounds of unwanted flesh—not by sawing off a leg (though that did cross her electrifying mind) but by doing what might be termed “wishful shrinking,” while staying sober and sane-ish.

Why? Because she wants you to be able to remind her about how Elizabeth Taylor settles a score and the scatological wonders of shoe tycoons. She doesn’t want to forget about how she and Michael Jackson became friends or how she ended up squaring off with not just a senator, but the Senator Ted Kennedy on a date. And she especially wants to preserve her memories of her dad Eddie Fisher—what their relationship was really like and—for all its apparently unconventional aspects—how they were just another father and daughter (her father acting as her daughter and Carrie acting as her beloved father’s dad). In the end, family is family, blood is thicker than the strippers she sent him, and what she’ll never forget is the tender affection she felt for her father who she wholeheartedly forgave and loved.
Shockaholic is now  available for pre-order.