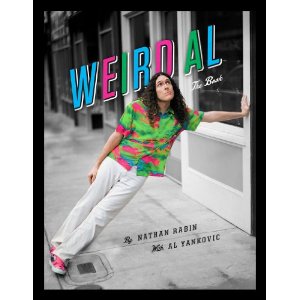 , by Nathan Rabin and Al Yankovic. Wierd Al did a few signing appearances for his last book. Hopefully he will do the same for this release.

The undisputed king of pop-culture parody, “Weird Al” Yankovic has sold more comedy recordings than any other artist in history, receiving three Grammy Awards (and 14 nominations) in the process. The man behind classics such as “Eat It

”, “Amish Paradise”, and “White & Nerdy” performed in more than 100 cities throughout North America, Europe, and Australia in support of his latest (and, to date, highest-charting) album, Alpocalypse.

At last the time has come for a comprehensive illustrated tribute to this icon of the American humor landscape. Covering more than three decades of hilarious songs, videos, concert performances, and his life story in words and pictures, and featuring an introduction, lists, tweets, and photo captions from Yankovic himself, Weird Al: The Book is the ultimate companion piece to an extraordinary career.

Login to Book Signing Central for all the latest author and signing events. If you’re not already a member, be sure to sign up to get the latest, including times, dates, and locations.