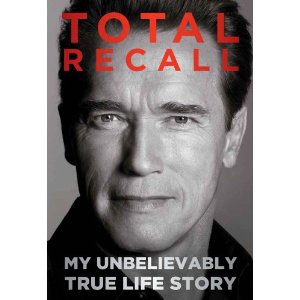 Coming October 1, 2012 with possible signing dates to be announced. Don’t miss out on “one of the most anticipated autobiographies of this generation”, Total Recall: My Unbelievably True Life Story

Arnold Schwarzenegger’s Total Recall is the candid story by one of the world’s most remarkable actors, businessmen, and world leaders.
Born in the small city of Thal, Austria, in 1947, Arnold Schwarzenegger moved to Los Angeles at the age of twenty-one. Within ten years, he was a millionaire businessman. After twenty years, he was the world’s biggest movie star. In 2003, he was elected governor of California and a household name around the world.

Stay tuned to Book Signing Central for all the latest author and signing events. If you’re not already a member, be sure to sign up to get the full schedules, including times, dates, and locations.