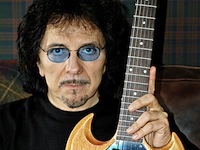 Guitar legend Tony Iommi is doing a signing tour of his new memoir titled, “Iron Man: My Journey through Heaven and Hell with Black Sabbath.” Iommi is a founding member of the English heavy metal band Black Sabbath (originally called Earth), and the only member to consistently appear on the band’s member roster throughout its entire existence. A pioneer of the heavy metal sound, Iommi ranked number one on Guitar World’s “100 Greatest Metal Guitarists of All Time” in 2004. He also played briefly with the band Jethro Tull in the late 60s. Iommi’s legendary signature sound is the result of an accident at a sheet metal factory, out of which was born his unique playing style. After the tips of his right hand fingers were severed, Iommi was ready to call it quits until a friend turned him on to guitarist Django Reinhardt. Iommi plays a six-string with the aid of soft plastic tips attached to the ends of his fingers. He released his first solo album, titled Iommi, in 2000.

Tony Iommi—the only original member of Black Sabbath who stayed with the group from its inception—would become to be known as the father of heavy metal. In his memoir, Iron Man: My Journey Through Heaven and Hell with Black Sabbath, he tells how, when he was a teenager, the ends of the two middle fingers on his right hand were sliced off by a piece of machinery. Doctors were able to take skin from one of his arms and graft it to his fingertips, but Iommi would never play the guitar normally again. He had to learn how to compensate for his disability by making the music sound “fuller.” Today, he’s credited for inspiring and producing the deeper, more powerful musical tones for which Black Sabbath became famous. In 2000—thirty years after it was first released—Black Sabbath won a Grammy for Best Metal Performance for their song “Iron Man.” They even performed at Buckingham Palace for the Queen’s Golden Jubilee in 2002. But their success wasn’t immediate or without hardship. From drug and alcohol abuse, to marital discord, to being called “Satanists,” to constant management problems and exits by band members—most notably Ozzy Osbourne—the musicians of Black Sabbath didn’t have an easy time of it.
In Iron Man, Iommi gives us a glimpse of what he experienced as a member of this legendary group, taking us through some of the band’s most bizarre moments onstage and backstage, and bringing us from the recording studios to the (trashed) hotel rooms. Throughout, we see the camaraderie within the band, as well as the struggles each member went through on their way to the top of the charts.

Tony Iommi is a cofounding member and lead guitarist of Black Sabbath and is among the most influential guitarists of all time. Born in 1948, he lives in Birmingham, England. 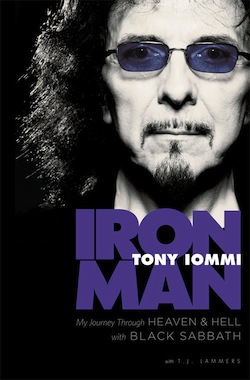