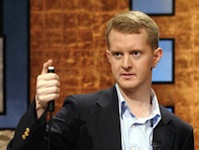 Jeopardy master, Ken Jennings, will be signing copies of “Maphead: Charting the Wide, Weird World of Geography Wonks.” Born in Seattle, Washington, and raised overseas, Ken Jennings grew up staying linked to American pop culture via TV. His favorite show was Jeopardy, which he watched daily after school. Returning to the states, he attended Brigham Young University where he double-majored in English and Computer Science. While there, Ken was captain of BYU’s academic competition team which did consistently well at national quiz bowl tournaments. Since graduating in 2000, Ken has worked as a writer for National Academic Quiz Tournaments. In 2004, Ken remained undefeated for 6 months on Jeopardy, winning a total of 74 games and $2.52 million. He’s the co-creator of two trivia games — the “Can You Beat Ken?” board game and the CD trivia game, “Quizzology.” His 2006 book titled “Brainiac” was a national bestseller.

It comes as no surprise that, as a kid, Jeopardy! legend Ken Jennings slept with a bulky Hammond world atlas by his pillow every night. Maphead recounts his lifelong love affair with geography and explores why maps have always been so fascinating to him and to fellow enthusiasts everywhere.Jennings takes readers on a world tour of geogeeks from the London Map Fair to the bowels of the Library of Congress, from the prepubescent geniuses at the National Geographic Bee to the computer programmers at Google Earth. Each chapter delves into a different aspect of map culture: highpointing, geocaching, road atlas rallying, even the “unreal estate” charted on the maps of fiction and fantasy. He also considers the ways in which cartography has shaped our history, suggesting that the impulse to make and read maps is as relevant today as it has ever been. From the “Here be dragons” parchment maps of the Age of Discovery to the spinning globes of grade school to the postmodern revolution of digital maps and GPS, Maphead is filled with intriguing details, engaging anecdotes, and enlightening analysis. If you’re an inveterate map lover yourself—or even if you’re among the cartographically clueless who can get lost in a supermarket—let Ken Jennings be your guide to the strange world of mapheads. 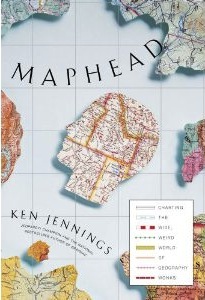