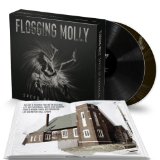 Irish-punk band and musical phenomenon Flogging Molly will be offering a live performance at Amoeba Music, followed by a CD signing in celebration of their new album, “Speed of Darkness.”

Whether you’ll be in San Fran for the event or not, you can pre-order “Speed of Darkness” on Amazon today.

The seven-member band, founded in 1997 by Irish expatriate Dave King, takes its name from Los Angeles bar Molly Malone’s where the band performed each week and grew their fan base in their early days. Their sound is a mix of traditional Celtic instruments like accordion and mandolin, with Punk Rock guitar riffs and heavy drums. Take a listen after the jump. Side One Dummy Records, the band’s label partner since the debut of their first studio CD “Swagger,” will be releasing “Speed of Darkness” on May 31, 2011.