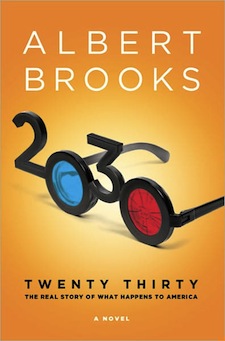 Writer, actor, and director, Albert Brooks, will be in NY and LA next month signing copies of “2030: The Real Story of What Happens to America.”

Born in Beverly Hills, California, the son of radio comedian Harry Einstein (Parkyakarkas), Brooks changed his name from Einstein before embarking on a career in stand-up so as not to be confused with the famous physicist – Albert Einstein. From the late 60s to the early 70s, Brooks was a regular on talk and variety shows and released two successful comedy albums – Comedy Minus One (1973) and A Star Is Bought (1975) which was nominated for a Grammy. In 1975, he first tried his hand at directing, when he directed six short films for the very first season of SNL.

Nominated for an Academy Award in 1987 for his role in in Broadcast News, Brooks has written and directed 10 films including Lost in America, Defending Your Life, Modern Romance, and Looking for Comedy in the Muslim World. He also write for Saturday Night Live from 1975 to 1976.

For other directors, Brooks has appeared in 30 films and TV series, including the series Weeds, Scorsese’s masterpiece Taxi Driver, and Steven Soderbergh’s Out of Sight. He’s also lent his voice to The Simpsons, Finding Nemo and Doctor Dolittle.

From the Publisher
Is this what’s in store?
June 12, 2030 started out like any other day in memory—and by then, memories were long. Since cancer had been cured fifteen years before, America’s population was aging rapidly. That sounds like good news, but consider this: millions of baby boomers, with a big natural predator picked off, were sucking dry benefits and resources that were never meant to hold them into their eighties and beyond. Young people around the country simmered with resentment toward “the olds” and anger at the treadmill they could never get off of just to maintain their parents’ entitlement programs.

But on that June 12th, everything changed: a massive earthquake devastated Los Angeles, and the government, always teetering on the edge of bankruptcy, was unable to respond.

The fallout from the earthquake sets in motion a sweeping novel of ideas that pits national hope for the future against assurances from the past and is peopled by a memorable cast of refugees and billionaires, presidents and revolutionaries, all struggling to find their way. In 2030, the author’s all-too-believable imagining of where today’s challenges could lead us tomorrow makes gripping and thought-provoking reading.

1 Comment on Albert Brooks, New York and LA Book Signing “2030: The Real Story of What Happens to America”