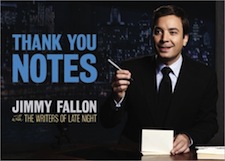 Talk show host and ex SNLer, Jimmy Fallon, has a new book of funnies titled “Thank You Notes” and he’ll be at Union Square next month signing copies.

Fallon currently hosts “Late Night with Jimmy Fallon,” Monday through Friday on NBC. Prior to his talk show, he was an SNL cast member from 1998 to 2004, most notably as co-anchor in the Weekend Update segment with Tina Fey.

Born in Brooklyn, and raised in the Central New York town of Saugerties, Fallon grew up reenacting the SNL sketches he watched as a kid. He was such a fan of the show that when he went off to college, he started a weekly event of gathering to watch SNL in his dorm at The College of Saint Rose in Albany. Starting as a Computer Science major and ending as a Communications major, Fallon ended up leaving college 15 units shy of a degree (you could’ve done that in one semester if only you’d applied yourself, Jimmy!).

“Thank You Notes” looks promising on the laughs. I’m already laughing that laugh of identification at the small excerpts from the book (after the jump). The book hits stores on May 23, 2011.

From Inside the Flap
“Thank you, slow walking family walking in front of me on the sidewalk. No, please, take your time. And definitely spread out, too, so you create a barricade of idiots. I am so thankful that you forced me to walk on the street and risk getting hit by a car in order to pass you so I could resume walking at a normal human pace.”

Jimmy Fallon has a few people and a few things to thank. In this brand-new book, the very first to come from his show, he addresses some 200 subjects in need of his undying “gratitude.” Each page will feature one note and a photograph of its recipient. But why read any more about formatting when you could just read a few more samples:

“Thank you, guy whose chair made a farting noise, for prompting him to spend the next 20 minutes awkwardly shifting around trying to re-create the noise, so people would know it was just the chair.”

“Thank you, Miley Cyrus, for being 16 and acting like a stripper at the Teen Choice Awards. If you REALLY wanna piss off your dad, why not just cut off his allowance?”

From Hilary Clinton to a light bulb he is too lazy to replace, these are the moments and memories that make Jimmy’s life a little bit fuller.