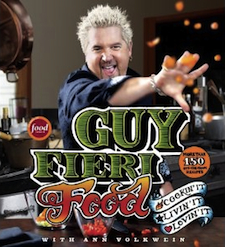 Fieri owns five restaurants in Northern California where he resides with his family, including two Tex Wasabi’s and three Johnny Garlic’s. He also launched the Cooking With Kids foundation in 2011, a program which encourages the development healthy eating habits in response to the childhood obesity crisis, and featured the first of an annual Culinary Camp this year.

From Inside the Flap
“If you’ve checked out my Diners, Drive-ins and Dives books or visited my restaurants, Johnny Garlic’s and Tex Wasabi’s, you know I’m down with all types of good food—and that I’ll do what’s required to track it down. In Guy Fieri Food, I’m cookin’ it my way, from the perfect recipe for Pepper Jack Pretzels (from Mr. Awesome Pretzel himself—that’s me) to how to pull together a Red Rocker Margarita Chicken sandwich to a full-on vegetable Guy’d (bet you didn’t see that one comin’!). Before I’m finished I’ll have you throwing parties with everything from Bacon-Jalapeno Duck appe-tapas to Chicago Beef Pizza to Johnny Garlic’s Cedar Plank Salmon. Fact is, I’ve been cookin’ it, livin’ it, and lovin’ it since I was just a kid, and it’s a privilege to help you bring home some of my own classic, big, and bold flavors.” –Guy Fieri