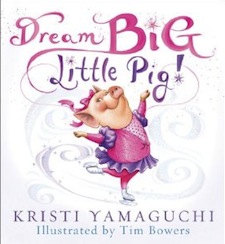 Olympic gold medalist, Kristi Yamaguchi, will be signing copies of her inspiring children’s book “Dream Big, Little Pig!” The book, illustrated by Tim Bowers, will be available in book stores March 1, 2011. You can pre-order it today on Amazon.

Yamaguchi is the 1992 Olympic Champion in Ladies’ Singles. She also won two World Figure Skating Championships in 1991 and 1992, and the Junior World Title in 1988. Her national titles include the U.S. Figure Skating Championships in 1992, and two National Titles as a pairs skater with Rudy Galindo in 1989 and 1990. She was inducted into the U.S. Olympic Hall of Fame in 2005. She was also Celebrity Champion on Season 6 of Dancing with the Stars. Hailing from Fremont, California, Yamaguchi has been married to retired professional hockey player Bret Hedican since 2000.

Poppy is a waddling, toddling pig with big dreams. She wants to be a star! But she soon discovers that’s not as easy as it sounds. It’s only when Poppy feels the magic of gliding and sliding, swirling and twirling on ice that our most persistent pig truly believes in herself: Poppy, star of the rink!

Kristi Yamaguchi is an ice-skating Olympic gold medalist and world champion who knows how to make dreams come true. Through her picture book debut, Kristi inspires children of all ages to dream big!

Kristi Yamaguchi is an Olympic figure skating champion and winner of Dancing With the Stars. Her motto “Always Dream” contributed to her success on and off the ice and is one that she aspires to instill in the hearts of children. Kristi currently lives in the San Francisco Bay area with her husband and their two young daughters.

Tim Bowers has always had a love for animals. In fact, he enjoyed spending time at his grandparents’ home visiting their furry friends, which at one time, included a pet pig named Porky! Tim has illustrated more than twenty-five children’s books and received numerous awards for his delightfully sweet and silly illustrations. He often visits schools to promote literacy and to share his experience and love for illustrating children’s books. Tim Bowers lives in Ohio with his wife. Visit him at www.timbowers.com