Henry Holt and Co. (September 20, 2022) Neil deGrasse Tyson “Starry Messenger”. If you are not able to attend the October 19th book tour event listed below and you’d still like to obtain a signed copy, there is good news. We will be offering a new slip-cased signed collector’s edition that will be available for pre-order soon.  Sign up below to get the news and the pre-order link when it goes live:

Join renowned astrophysicist, bestselling author and one of the most popular figures in modern science, Neil deGrasse Tyson, when he discusses his new book Starry Messenger.

Bringing his cosmic perspective to civilization on Earth, Neil deGrasse Tyson shines new light on the crucial fault lines of our time?war, politics, religion, truth, beauty, gender, and race?in a way that stimulates a deeper sense of unity for us all.

In a time when our political and cultural views feel more polarized than ever, Tyson provides a much-needed antidote to so much of what divides us, while making a passionate case for the twin chariots of enlightenment?a cosmic perspective and the rationality of science.

After thinking deeply about how science sees the world and about Earth as a planet, the human brain has the capacity to reset and recalibrates life’s priorities, shaping the actions we might take in response. No outlook on culture, society, or civilization remains untouched.

With crystalline prose, Starry Messenger walks us through the scientific palette that sees and paints the world differently. From insights on resolving global conflict to reminders of how precious it is to be alive, Tyson reveals, with warmth and eloquence, an array of brilliant and beautiful truths that apply to us all, informed and enlightened by knowledge of our place in the universe.

“Every page is lit up by an original poetic imagination but bearing the unmistakable stamp of a rational mind, steeped in maths and science.”
-Richard Dawkins, author of The Selfish Gene and The God Delusion 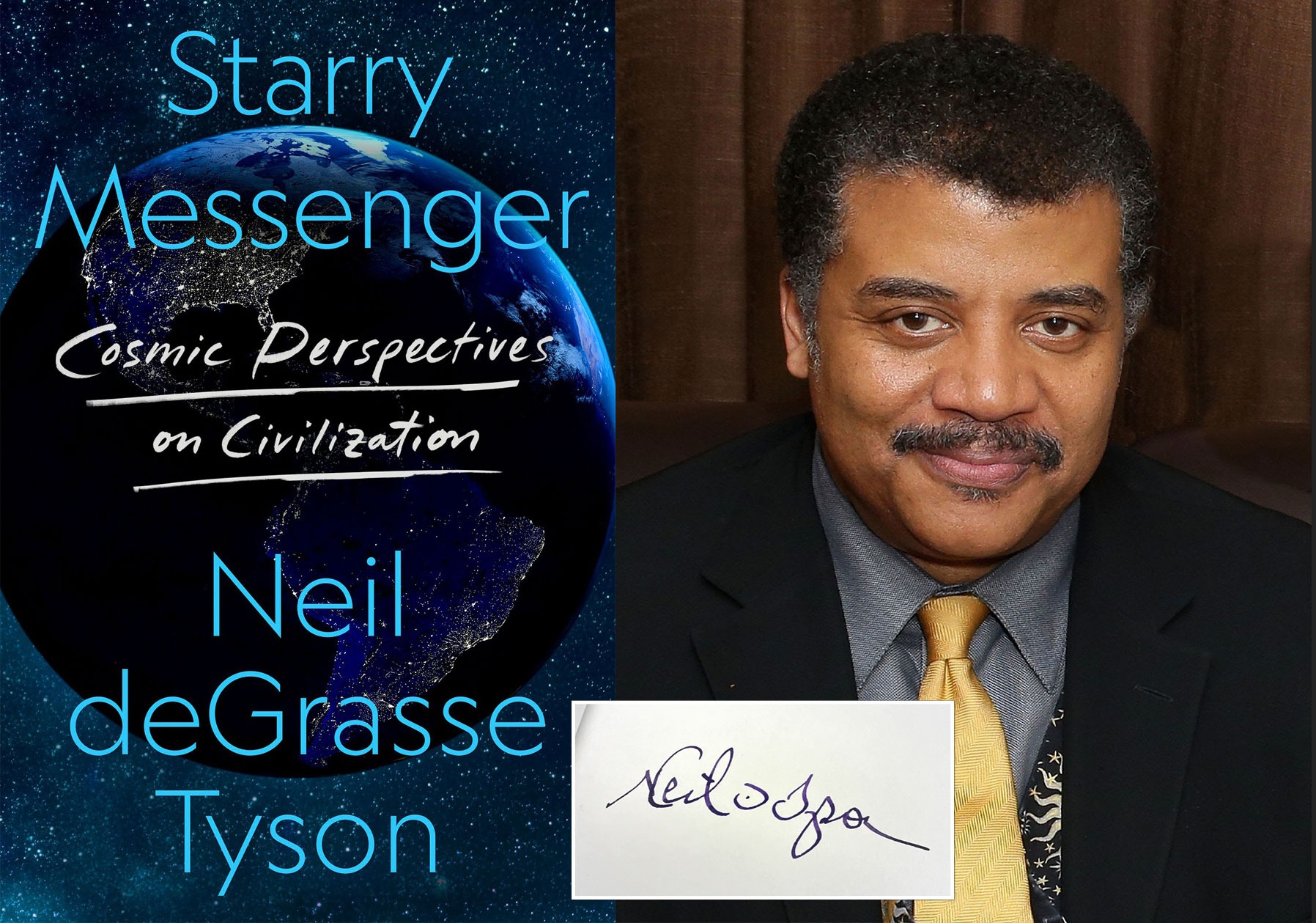 Neil deGrasse Tyson is an American astrophysicist, author, and science communicator. Tyson studied at Harvard University, the University of Texas at Austin, and Columbia University. From 1991 to 1994, he was a postdoctoral research associate at Princeton University. In 1994, he joined the Hayden Planetarium as a staff scientist and the Princeton faculty as a visiting research scientist and lecturer. In 1996, he became director of the planetarium and oversaw its $210 million reconstruction project, which was completed in 2000. Since 1996, he has been the director of the Hayden Planetarium at the Rose Center for Earth and Space in New York City. The center is part of the American Museum of Natural History, where Tyson founded the Department of Astrophysics in 1997 and has been a research associate in the department since 2003.

From 1995 to 2005, Tyson wrote monthly essays in the “Universe” column for Natural History magazine, some of which were later published in his books Death by Black Hole (2007) and Astrophysics for People in a Hurry (2017). During the same period, he wrote a monthly column in StarDate magazine, answering questions about the universe under the pen name “Merlin”. Material from the column appeared in his books Merlin’s Tour of the Universe (1998) and Just Visiting This Planet (1998). Tyson served on a 2001 government commission on the future of the U.S. aerospace industry and on the 2004 Moon, Mars and Beyond commission. He was awarded the NASA Distinguished Public Service Medal in the same year. From 2006 to 2011, he hosted the television show NOVA ScienceNow on PBS. Since 2009, Tyson has hosted the weekly podcast StarTalk. A spin-off, also called StarTalk, began airing on National Geographic in 2015. In 2014, he hosted the television series Cosmos: A Spacetime Odyssey, a successor to Carl Sagan’s 1980 series Cosmos: A Personal Voyage.

The U.S. National Academy of Sciences awarded Tyson the Public Welfare Medal in 2015 for his “extraordinary role in exciting the public about the wonders of science”.