Join the internationally bestselling author of the Caraval series, Stephanie Garber to discuss “THE BALLAD OF NEVER AFTER,” the fiercely-anticipated sequel to the #1 New York Times bestseller Once Upon a Broken Heart.

Stephanie Garber is the #1 New York Times and internationally bestselling author of Once Upon a Broken Heart, The Ballad of Never After, and the Caraval trilogy. Her books have been translated into thirty languages. 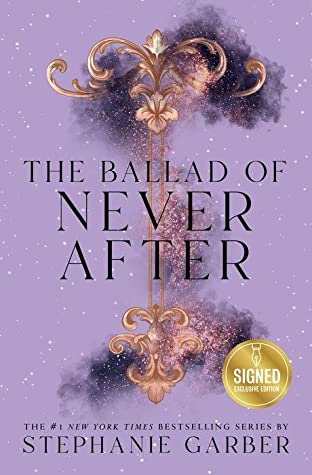 This Barnes & Noble Exclusive Edition is signed by Stephanie Garber, includes a bonus chapter from Jacks’ POV, and has a unique cover and case stamp!

The fiercely-anticipated sequel to the #1 New York Times bestseller Once Upon a Broken Heart, starring Evangeline Fox and the Prince of Hearts on a new journey of magic, mystery, and heartbreak

Not every love is meant to be.

After Jacks, the Prince of Hearts, betrays her, Evangeline Fox swears she’ll never trust him again. Now that she’s discovered her own magic, Evangeline believes she can use it to restore the chance at happily ever after that Jacks stole away.

But when a new terrifying curse is revealed, Evangeline finds herself entering into a tenuous partnership with the Prince of Hearts again. Only this time, the rules have changed. Jacks isn’t the only force Evangeline needs to be wary of. In fact, he might be the only one she can trust, despite her desire to despise him.

Instead of a love spell wreaking havoc on Evangeline’s life, a murderous spell has been cast. To break it, Evangeline and Jacks will have to do battle with old friends, new foes, and a magic that plays with heads and hearts. Evangeline has always trusted her heart, but this time she’s not sure she can…