Get all the news and updates.

Knopf (November 1, 2022) Bono “Surrender: 40 Songs, One Story”. Bono from the band U2 will be releasing a brand new book this November. Sign up below to get news alerts about the book tour, appearances, and signed book news. This usually happens around the release date and we will send the news when it becomes available:

Bono—artist, activist, and the lead singer of Irish rock band U2—has written a memoir: honest and irreverent, intimate and profound, Surrender is the story of the remarkable life he’s lived, the challenges he’s faced, and the friends and family who have shaped and sustained him.

“When I started to write this book, I was hoping to draw in detail what I’d previously only sketched in songs. The people, places, and possibilities in my life. Surrender is a word freighted with meaning for me. Growing up in Ireland in the seventies with my fists up (musically speaking), it was not a natural concept. A word I only circled until I gathered my thoughts for the book. I am still grappling with this most humbling of commands. In the band, in my marriage, in my faith, in my life as an activist. Surrender is the story of one pilgrim’s lack of progress . . . With a fair amount of fun along the way.” —Bono

As one of the music world’s most iconic artists and the cofounder of the organizations ONE and (RED), Bono’s career has been written about extensively. But in Surrender, it’s Bono who picks up the pen, writing for the first time about his remarkable life and those he has shared it with. In his unique voice, Bono takes us from his early days growing up in Dublin, including the sudden loss of his mother when he was fourteen, to U2’s unlikely journey to become one of the world’s most influential rock bands, to his more than twenty years of activism dedicated to the fight against AIDS and extreme poverty. Writing with candor, self-reflection, and humor, Bono opens the aperture on his life—and the family, friends, and faith that have sustained, challenged, and shaped him.

Surrender’s subtitle, 40 Songs, One Story, is a nod to the book’s forty chapters, which are each named after a U2 song. Bono has also created forty original drawings for Surrender, which will appear throughout the book.

Out Of Control – ‘SURRENDER: 40 Songs, One Story’ by Bono

Bono reads an extract from his book – ‘SURRENDER: 40 Songs, One Story’ – in an animation which illustrates an extract from the chapter titled ‘Out of Control’, in which he tells the story of starting to write U2’s first single on 10th May 1978 – his 18th birthday, exactly 44 years ago today. In ‘SURRENDER’ – out on 1st November – Bono writes about his remarkable life and those he has shared it with—from his early days growing up in Dublin, including the sudden loss of his mother when he was 14, to U2’s unlikely journey to become one of the world’s most influential rock bands, to his 20 years of activism dedicated to the fight against AIDS and extreme poverty. The title ‘SURRENDER: 40 Songs, One Story’ refers to the book’s 40 chapters, which are each named after a U2 song. Bono has also created 40 original drawings for ‘SURRENDER’ which will appear throughout the book, and also feature in this animated video. 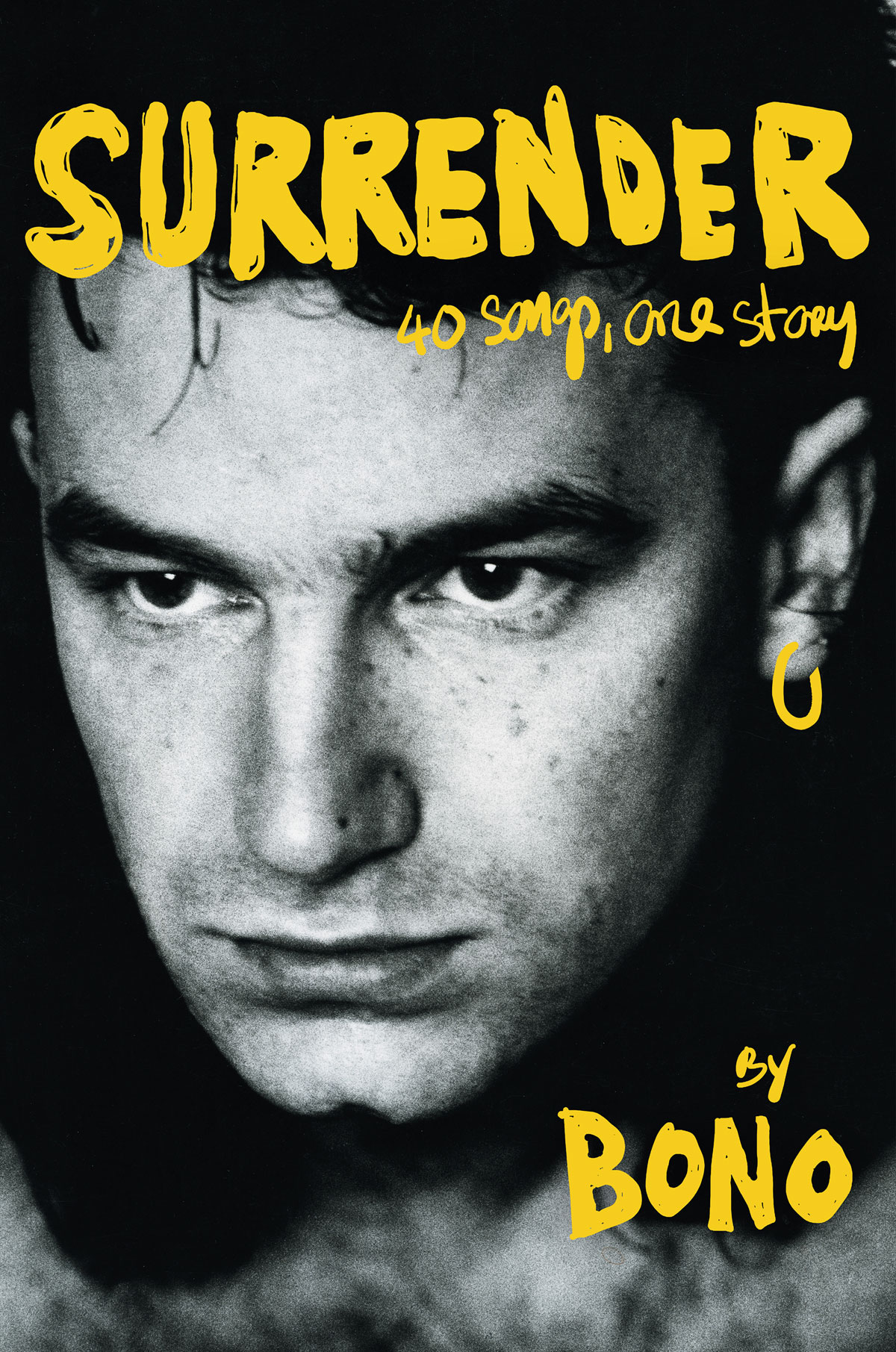 The lead singer of U2, Bono was born Paul David Hewson in Dublin. He met The Edge, Larry Mullen Jr., and Adam Clayton at school, and in 1978, U2 was formed. The band released their first album, Boy, on Island Records in 1980 and to date have released a total of fourteen studio albums that have sold 157 million copies worldwide. Heralded by Rolling Stone as “a live act simply without peer,” the band’s record-breaking 360° Tour (2009–2011) remains the highest-grossing concert band tour of all time. U2 have won numerous awards, including twenty-two Grammys, more than any other duo or group, as well as an Academy Award nomination and the Amnesty International Ambassador of Conscience Award. In 2005, U2 was inducted into the Rock & Roll Hall of Fame.

Alongside his role in U2, Bono is a ground-breaking activist. A leader in Jubilee 2000’s Drop the Debt campaign, he next took on the fight against HIV/AIDS and extreme poverty, co-founding sister organizations ONE and (RED). ONE is a movement of millions of people dedicated to the fight against extreme poverty and preventable disease. With ONE, Bono has lobbied heads of state and legislatures all around the world, helping to ensure the passage of programs, such as the U.S. PEPFAR AIDS program, that have helped to save tens of millions of lives over the past twenty years. (RED)—which partners with companies to raise public awareness about, and corporate contributions for, the AIDS crisis—has to date generated more than $700 million for the Global Fund to treat and prevent AIDS in Africa. Since 2020, ONE and (RED) have also been fighting COVID-19 and its impact on the developing world.

Bono has received a number of awards for his music and activism, including the Freedom of the City of Dublin (with U2), Chile’s Pablo Neruda Medal of Honor, the Légion d’honneur from the French government, an honorary British knighthood, the Fulbright Prize for International Understanding, and TIME magazine’s Person of the Year (along with Bill and Melinda Gates). He lives in Dublin with his wife Ali Hewson.