David Duchovny is an award-winning actor, writer, director, New York Times best-selling author, and singer-songwriter. With an acting career spanning more than three decades, Duchovny is a two-time Golden Globe winner and four-time Emmy nominee. He is a prolific author whose fourth novel, Truly Like Lightning, was published in February 2021. His previous novels include the New York Times best seller Holy Cow, Bucky F*cking Dent, and Miss Subways. As a musician, Duchovny has released two studio albums, Hell or Highwater and Every Third Thought. 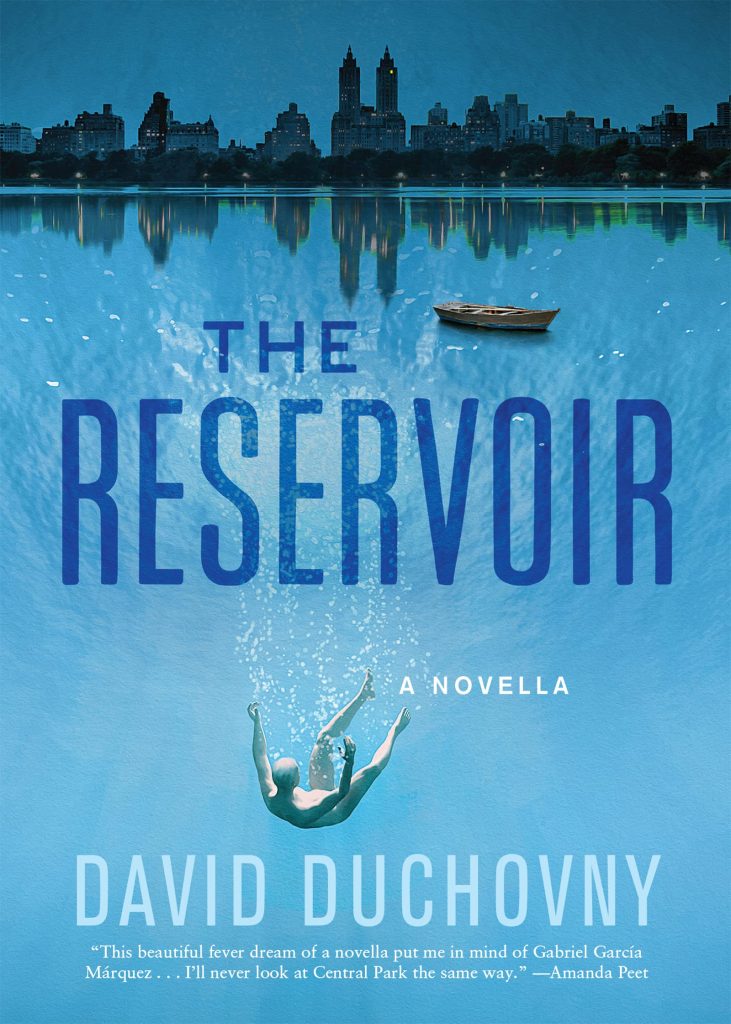 A former Wall Street veteran, quarantined by the coronavirus, becomes consumed with madness—or the fulfillment of his own mythic fate.

“This beautiful fever dream of a novella put me in mind of Gabriel García Márquez because of its sense of romance—and humor—in the midst of calamity. I’ll never look at Central Park the same way.”
—Amanda Peet

“A heartbreaking story of the cloaked complexities of father-daughter love framed as a sort of virtuoso suicide note. In its depiction of the breakthrough longings that come with growing older, it also struck me, wonderfully, as a contemporary Death in Venice.”
—Walter Kirn, author of Blood Will Out

“Biting and funny, The Reservoir is also deep and reflective. A mystery wrapped in a fever dream. A tale for our infectious times.”
—Chris Carter, director/writer, creator of The X-Files

The Reservoir follows an unexceptional man in an exceptional time. We see our present-day pandemic world and New York City through the eyes of a former Wall Street veteran, Ridley, as he looks back upon his life in his enforced quarantine solitude, wondering what it all means and who he really is.

Sitting and brooding night after night, gazing out his huge picture window high above the Central Park Reservoir, Ridley spots a flashing light in an apartment across the park as if a lonely quarantined person is signaling him in Morse code. His determination to find out who this mystery woman is leads him on an epic quest that will ultimately tempt him with either delusional madness or the fulfillment of his own mythic fate.

Is he a dying man going mad or an everyman metamorphosing into a hero? Or both? We accompany Ridley as he leaves the safety of his apartment window to save the Fifth Avenue femme fatale and descends into a dangerous, increasingly surreal world of global conspiracies, madness, and sickness of this viral time. As Ridley’s actions grow more and more uncharacteristic, he realizes the key to all the mysteries of now, and even all of history, seem to lie deep beneath the freezing waters of the reservoir.

The Reservoir is a twisted rom-com for our distanced time, when the merest touch could kill and conspiracy theories propagate like viruses—a contemporary union of Death in Venice, Rear Window, and The Plague.