Multi-Award winning and Amazon Bestselling author, Amy Jarecki likes to grab life, latch on and reach for the stars. She’s married to a mountain-biking pharmacist and has put four kids through college. She studies karate, ballet, yoga, and often you’ll find her hiking Utah’s Santa Clara Hills. Reinventing herself a number of times, Amy sang and danced with the Follies, was a ballet dancer, a plant manager, and an accountant for Arnott’s Biscuits in Australia. After earning her MBA from Heroit-Watt University in Scotland, she dove into the world of historical romance and hasn’t returned. Become a part of her world and learn more about Amy’s books on amyjarecki.com, find her on Facebook and Twitter as @amyjarecki. 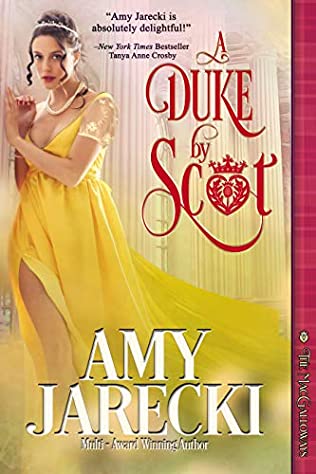 It is one thing to defy convention…but quite another to completely thwart it in the pursuit of insatiable desire.

His Grace, Martin MacGalloway, has well-earned the reputation as the most celebrated rake on the entire isle of Britain. But upon his father’s sudden death, he heads for Scotland where he finds his inheritance in a shambles, his sisters without prospects, and his brothers relying on his patronship—and he’s not about to conquer his problems alone.

Penniless, Lady Julia St. Vincent has no choice but to dress as a man and accept a position as steward to the Duke of Dunscaby. But when she meets His Grace, she’s not expecting him to be dashing, charming, or utterly enchanting. And the more time she spends with the duke, the more difficult it is to ignore the flickers of passion smoldering in her heart.

Martin instantly develops a fondness for the wee man. While they work together to rebuild the Dunscaby dynasty, they travel to London where Martin takes it upon himself to introduce his sheltered steward to the world of manly pursuits. Julia falls from one mortifyingly compromising situation to another as she pines for a duke she can never have…until an old friend invites her to a masque. And there, it takes but one kiss for Martin to stop at nothing in his pursuit of the mysterious woman who has captured his very soul.