Faridah Àbíké-Íyímídé is a writer from South London who has dreamt of writing books about black kids saving (or destroying) the world all her life. She is an avid tea drinker, and a collector of strange mugs. Faridah currently studies English Literature at a university in the Scottish Highlands. 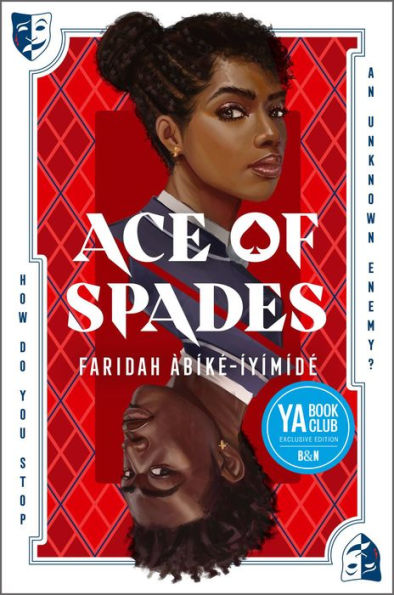 When shocking secrets are blasted out to students at Niveus Private Academy via an anonymous texter, two students’ lives are turned completely upside down on the cusp of graduation. However, they soon realize that Aces happens to only be targeting Black students — in fact, the only two Black students in the elite private school. This twisty ride of a thriller will leave you reeling as you uncover the disturbing secrets lurking in the dark corners of the school and will linger with you long after the last page.

The Barnes & Noble YA Book Club Edition will include a special prequel chapter.Gossip Girl meets Get Out in Ace of Spades, a YA contemporary thriller by debut author Faridah Àbíké-Íyímídé about two students, Devon & Chiamaka, and their struggles against an anonymous bully.

All you need to know is . . . I’m here to divide and conquer. Like all great tyrants do.—Aces

When two Niveus Private Academy students, Devon Richards and Chiamaka Adebayo, are selected to be part of the elite school’s senior class prefects, it looks like their year is off to an amazing start. After all, not only does it look great on college applications, but it officially puts each of them in the running for valedictorian, too.

Shortly after the announcement is made, though, someone who goes by Aces begins using anonymous text messages to reveal secrets about the two of them that turn their lives upside down and threaten every aspect of their carefully planned futures.

As Aces shows no sign of stopping, what seemed like a sick prank quickly turns into a dangerous game, with all the cards stacked against them. Can Devon and Chiamaka stop Aces before things become incredibly deadly?