Lieutenant Colonel John B. Lang will be signing “A Final Valiant Act.” This is a special event that will also feature surviving members of Doug Dickey’s platoon, who will also sign books and greet attendees.

Lieutenant Colonel John B. Lang, USMC (Ret.) is a decorated combat veteran of Operation Desert Storm; the United Nations operation in Somalia; and the war in Iraq, retiring with more than 22 years of commissioned service.

He was honored as the Marine Corps’ intelligence officer of the year in 1996 with the Donald G. Cook Award.

Lt Col Lang is a graduate of the U.S. Naval Academy, where he majored in military history. He also has an MA in International Relations from Creighton University.

Additionally, he is a graduate of the Air War College and Naval War College courses, and the Armed Forces Staff College. Lt Col Lang has always admired the Vietnam veterans who were his leaders, mentors, and friends throughout his career. He has attended 2nd Platoon’s annual reunions since 2006 and Doug’s comrades made him an honorary member of 2nd Platoon in 2009. John Lang is a native of Monterey, California. 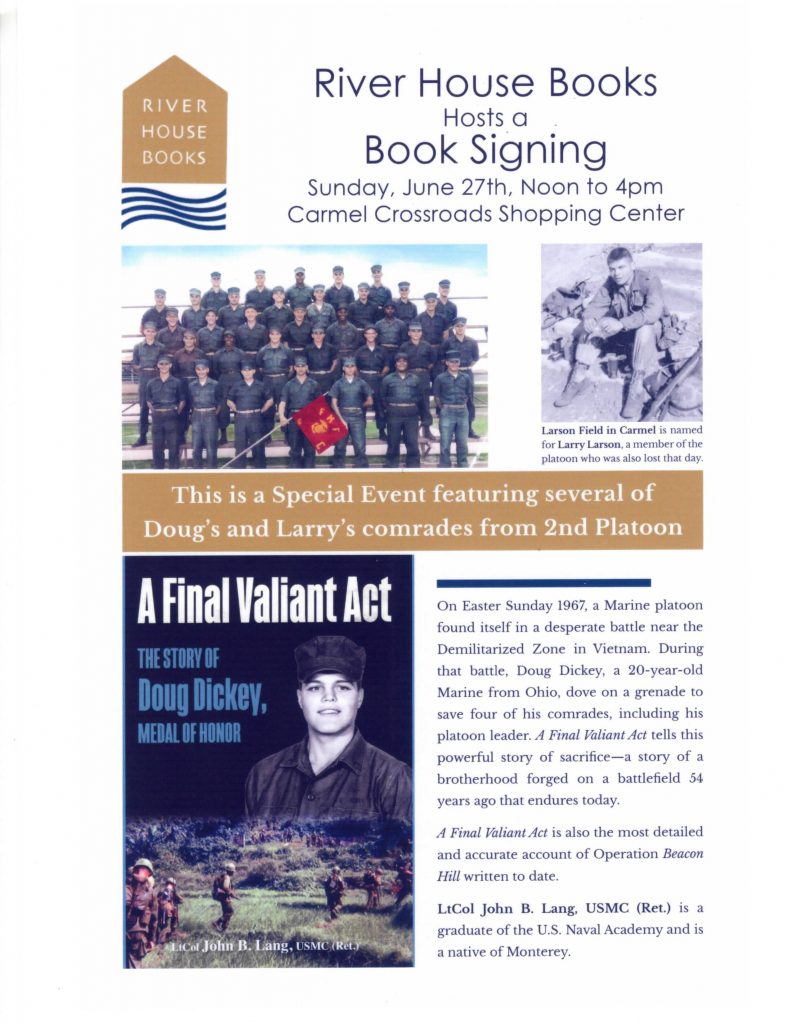 Doug Dickey was an unlikely Marine hero. He was a gentle soul who sang in the school’s chorus and struggled to make it through boot camp. However, in the terrible seconds that passed after a grenade landed in the middle of his platoon’s command element, Doug chose to sacrifice his life to save his comrades. For this Final Valiant Act, Doug received the Medal of Honor.

Doug grew up on a farm in Ohio and enlisted in the Marine Corps with four of his friends from high school. Arriving in Vietnam, he was assigned to “Blackjack” Westerman’s 1st Battalion, 4th Marines—one of the few Marine units to make amphibious assaults during the Vietnam War.

As part of 2nd Platoon, Company C, Doug took part in Operation Deckhouse VI, to rout the Viet Cong from Quang Ngai; and Operation Beacon Hill, which culminated in the desperate battle on March 26, 1967. That afternoon, the platoon became engaged with a much larger NVA unit just south of the DMZ. In the midst of that fierce battle, with casualties mounting rapidly, an enemy grenade landed in the middle of the platoon’s command group. Doug dove on the grenade—saving his friends and comrades. Second Platoon was ultimately victorious, but at a high cost: more than 40 men had gone into battle that day; only 12 walked out the next morning.

Doug’s comrades in 2nd Platoon never forgot him. Easter Sunday 1967 was seared into their memories. In 1997, they began holding yearly reunions. They decided to honor Doug by holding their first reunion in his hometown. Harold and Leona Dickey were finally able to meet the men their son had saved 30 years earlier.

A Final Valiant Act is the result of over 14 years of research— drawing on Doug’s letters home, and more than 50 interviews.

The personal stories are woven into a meticulously researched battle history, sourced from dozens of declassified combat reports—yielding the most detailed account of Operation Beacon Hill yet written.