Update: The publication of this release has been revised to April 21, 2021

On March 2, 2021, President George W. Bush will publish a new book entitled Out of Many, One: Portraits of America’s Immigrants, which will bring to the forefront the stories of individuals who exemplify our proud history as a nation of immigrants. Through 43 powerful four-color portraits — personally painted by the President himself — and their accompanying stories, Out of Many, One reminds us of the countless ways in which America has been strengthened by those who have come here in search of a better life.

A public exhibition of the portraits and an in-depth look at the many issues surrounding the immigration debate in our country will run from March 2, 2021 through January 3, 2022 at the George W. Bush Presidential Center.

“At its core, immigration is a sign of a confident and successful nation. It says something about our country that people all around the world are willing to leave their homes and leave their families and risk everything to come to our country. Their talent and hard work and love of freedom have helped us become the leader of the world. Our generation must ensure that America remains a beacon of liberty and the most hopeful society the world has ever known. We must always be proud to welcome people as fellow Americans. Our new immigrants are just what they’ve always been — people willing to risk everything for the dream of freedom.” — President George W. Bush 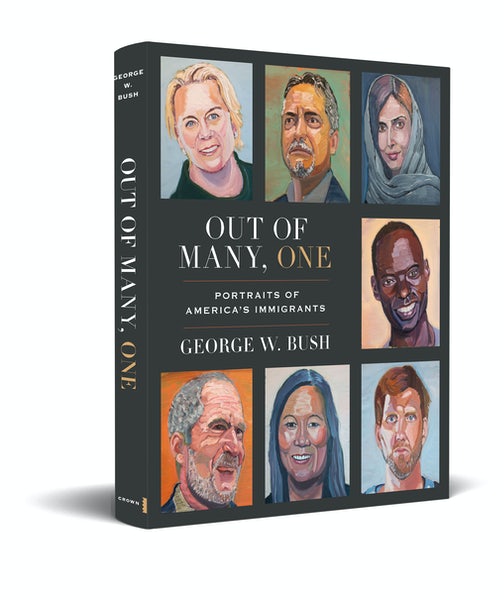 In this powerful new collection of oil paintings and stories, President George W. Bush spotlights the inspiring journeys of America’s immigrants and the contributions they make to the life and prosperity of our nation.

The issue of immigration stirs intense emotions today, as it has throughout much of American history. But what gets lost in the debates about policy are the stories of immigrants themselves, the people who are drawn to America by its promise of economic opportunity and political and religious freedom—and who strengthen our nation in countless ways.

In the tradition of Portraits of Courage, President Bush’s #1 New York Times bestseller, Out of Many, One brings together forty-three full-color portraits of men and women who have immigrated to the United States, alongside stirring stories of the unique ways all of them are pursuing the American Dream. Featuring men and women from thirty-five countries and nearly every region of the world, Out of Many, One shows how hard work, strong values, dreams, and determination know no borders or boundaries and how immigrants embody values that are often viewed as distinctly American: optimism and gratitude, a willingness to strive and to risk, a deep sense of patriotism, and a spirit of self-reliance that runs deep in our immigrant heritage. In these pages, we meet a North Korean refugee fighting for human rights, a Dallas-based CEO who crossed the Rio Grande from Mexico at age seventeen, and a NASA engineer who as a girl in Nigeria dreamed of coming to America, along with notable figures from business, the military, sports, and entertainment. President Bush captures their faces and stories in striking detail, bringing depth to our understanding of who immigrants are, the challenges they face on their paths to citizenship, and the lessons they can teach us about our country’s character.

As the stories unfold in this vibrant book, readers will gain a better appreciation for the humanity behind one of our most pressing policy issues and the countless ways in which America, through its tradition of welcoming newcomers, has been strengthened by those who have come here in search of a better life.

George W. Bush served as the forty-third President of the United States, from 2001 to 2009. He had previously served as Governor of Texas. He and his wife, Laura, live in Dallas, where they founded the George W. Bush Presidential Center at Southern Methodist University. President Bush is the author of three #1 bestsellers: Decision Points, his presidential memoir; 41, a biography of his father, President George H. W. Bush; and Portraits of Courage, a collection of oil paintings and stories honoring the sacrifice of America’s military veterans.

“Across the world, good men and women still dream of starting life anew in America – people who bring energy, and talent, and faith in the future. Often they bring a special love of freedom, because they have seen how life works without it. The great yearning of so many to live in our country presents a significant challenge. America’s elected representatives have a duty to regulate who comes in and when. In meeting this responsibility, it helps to remember that America’s immigrant history made us who we are. Amid all the complications of policy, may we never forget that immigration is a blessing and a strength.”