Join a Facebook Live event with M.D. Missaiel as he discusses his new book, “The Alternative History of the Decline and Fall of the Roman Empire.”

M.D. Missaiel (aka Martin Missaiel, aka Mina Yehia Danial Missaiel) is an indie author, with a background in art and architecture. He was born in Egypt, grew up in Chicago, and based in the metro DC area. He focuses on arts, classics, history, and activism, all of which come together in his debut novel The Alternative History of the Decline and Fall of the Roman Empire. 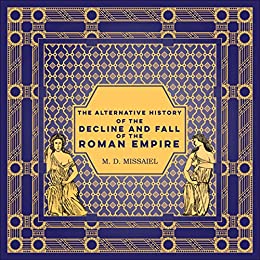 Saul Brutus, a lobbyist for a questionable industry, is pulled into an alternate world with a different history than our own. In this strange journey, Brutus tours the strange world with his new partner Speaksall via land, water, air, and space aboard one multi- environment coach. He encounters a hyper-advanced society and even more advanced struggles, which make him realize the virtue of progress, the mistakes of our predecessors, and the consequences of his own choices.