Tony Hillery is the founder and executive director of Harlem Grown. In 2011 he began volunteering at a public elementary school in Harlem. It was then that he noticed the vacant lot across from the street and had a big idea. The rest is history. Tony lives in New York, New York. Harlem Grown is his picture book debut. 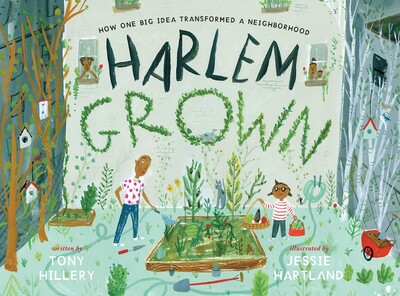 “Hartland’s joyful folk-art illustrations bop from the gray-toned jazzy vibrancy of a bustling city neighborhood to the colorful harvest of a lush urban farm.” —The New York Times
“An inspiring picture book for youngsters with meaningful ties to the environment, sustainability, and community engagement.” —Booklist

Discover the incredible true story of Harlem Grown, a lush garden in New York City that grew out of an abandoned lot and now feeds a neighborhood.

Once
In a big city called New York
In a bustling neighborhood
There was an empty lot.
Nevaeh called it the haunted garden.

Harlem Grown tells the inspiring true story of how one man made a big difference in a neighborhood. After seeing how restless they were and their lack of healthy food options, Tony Hillery invited students from an underfunded school to turn a vacant lot into a beautiful and functional farm. By getting their hands dirty, these kids turned an abandoned space into something beautiful and useful while learning about healthy, sustainable eating and collaboration.

Five years later, the kids and their parents, with the support of the Harlem Grown staff, grow thousands of pounds of fruits and vegetables a year. All of it is given to the kids and their families. The incredible story is vividly brought to life with Jessie Hartland’s “charmingly busy art” (Booklist) that readers will pore over in search of new details as they revisit this poignant and uplifting tale over and over again.

Harlem Grown is an independent, not-for-profit organization. The author’s share of the proceeds from the sale of this book go directly to Harlem Grown.