Christopher Buckley is a novelist, essayist, humorist, critic, magazine editor, and memoirist. His books include Thank You for Smoking, The Judge Hunter, Make Russia Great Again, and The Relic Master. He worked as a merchant seaman and White House speechwriter. He has written for many newspapers and magazines and has lectured in over seventy cities around the world. He was awarded the Thurber Prize for American Humor and the Washington Irving Medal for Literary Excellence. 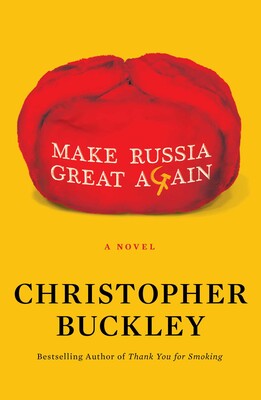 The award-winning and bestselling author of Thank You for Smoking delivers a hilarious and whipsmart fake memoir by Herb Nutterman—Donald Trump’s seventh chief of staff—who has written the ultimate tell-all about Trump and Russia.

Herb Nutterman never intended to become Donald Trump’s White House chief of staff. Herb served the Trump Organization for twenty-seven years, holding jobs in everything from a food and beverage manager at the Trump Magnifica to being the first general manager of the Trump Bloody Run Golf Course. And when his old boss asks “his favorite Jew” to take on the daunting role of chief of staff, Herb, spurred on by loyalty, agrees.

But being the chief of staff is a lot different from being a former hospitality expert. Soon, Herb finds himself deeply involved in Russian intrigue, deflecting rumors about Mike Pence’s high school involvement in a Satanic cult, and leading President Trump’s reelection campaign.

What Nutterman experiences is outrageous, outlandish, and otherwise unbelievable—therefore making it a deadly accurate account of being the chief of staff during the Trump administration. With hilarious jabs at the biggest world leaders and Washington politics overall, Make Russia Great Again is a timely political satire from “one of the funniest writers in the English language” (Tom Wolfe).