Join for a virtual event with comedian and writer Sara Schaefer, author of “Grand.” Sara will be in conversation with Naomi Ekperigin.

Sara Schaefer is a stand-up comedian and writer. She was the cohost of MTV’s Nikki & Sara Live and has written for numerous television shows including The Fake News with Ted Nelms and The Mark Twain Prize for American Humor. Sara’s solo show Little White Box debuted to a sold-out run at the 2017 Edinburgh Fringe Festival, and her Comedy Central Stand-Up Presents special premiered in 2019. She lives in Los Angeles. 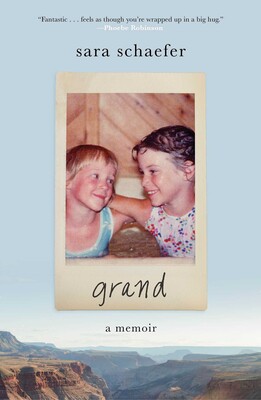 For fans of Mennonite in a Little Black Dress and Let’s Pretend This Never Happened, comedian and Emmy Award–winning writer Sara Schaefer’s hilariously honest memoir follows Sara’s trip through the Grand Canyon with her sister that causes her to reflect on her childhood and the scandal that changed her family forever.

When Sara Schaefer is in first grade, her father warns her to always tell the truth because one lie leads to another and soon you will find yourself in a hole you can’t escape. A few years later, the Schaefer family is completely upended when it’s revealed that their grand life is based on a lie. Her parents become pariahs in their upper middle class community and go from non-religious people to devout church members. The idea of good and evil as binary, opposed forces is drilled into Sara and it becomes the perfect framework on which to build her anxiety and increasingly-obsessive thoughts.

The year she turns forty, Sara decides to take each member of her family on a one-on-one vacation culminating with a whitewater rafting journey through the Grand Canyon with her younger sister. The only problem is she’s terrified of rafting. Along the way, she grapples with unresolved grief over the death of her mother and the family scandal that changed the trajectory of her life.

Heartfelt, candid, and witty, Grand is a story about family, identity, and struggling to make something of yourself. Sara deconstructs her struggles with anxiety and depression, what it means to be a good person, and the radically discordant stories we tell ourselves and share with the world.