Tana Wojczuk is a senior nonfiction editor at Guernica and teaches writing at New York University. Previously, she has worked as an arts critic for Vice, Bomb Magazine, and Paste and as a columnist for Guernica. Other essays, criticism, and poetry have appeared in in The New York Times, Tin House, The Believer, Gulf Coast, Apogee, Lapham’s Quarterly, The Rumpus, Narrative, Opium Magazine, and elsewhere. Tana has an MFA in nonfiction from Columbia University where she formerly taught. She was recently a finalist for the Gulf Coast Nonfiction Prize and has been a fellow at the Helene Wurlitzer Foundation residency and Tin House Summer Writers Workshop. Originally from Boulder, Colorado she now lives in Brooklyn, New York. 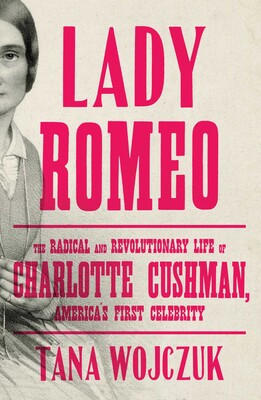 For fans of Book of Ages and American Eve, this illuminating and enthralling biography of 19th-century queer actress Charlotte Cushman portrays her radical lifestyle that riveted New York City and made headlines across America.

From the very beginning, she was a radical. At age nineteen, Charlotte Cushman, America’s beloved actress and the country’s first true celebrity, left her life—and countless suitors—behind to make it as a Shakespearean actress. After revolutionizing the role of Lady Macbeth in front of many adoring fans, she went on the road, performing in cities across a dividing America and building her fame. She was everywhere. And yet, her name has faded in the shadows of history.

Now, for the first time in decades, Cushman’s story comes to full and brilliant life in this definitive, exhilarating, and enlightening biography of the 19th-century icon. With rarely seen letters, Wojczuk reconstructs the formative years of Cushman’s life, set against the excitement and drama of New York City in the 1800s, featuring a cast of luminaries and revolutionaries that changed the cultural landscape of America forever.

A vivid portrait of an astonishing and uniquely American life, Lady Romeo reveals one of the most remarkable women in United States history, and restores her to the center stage where she belongs.