Nicholas Kristof & Sheryl WuDunn will sign copies of “Tightrope” in CA next month.

Nicholas D. Kristof has coauthored several books with his wife, Sheryl WuDunn, including A Path Appears and Half the Sky. Together they were awarded a Pulitzer Prize in 1990 for their coverage of China. They also received the Dayton Literary Peace Prize for Lifetime Achievement in 2009. Now an op-ed columnist for the New York Times, Kristof was previously bureau chief in Hong Kong, Beijing, and Tokyo. He won his second Pulitzer in 2006 for his columns on Darfur.

Sheryl WuDunn has coauthored several books with her husband, Nicholas D. Kristof, including Half the Sky and A Path Appears. Together they were awarded a Pulitzer Prize in 1990 for their coverage of China. They also received the Dayton Literary Peace Prize for Lifetime Achievement in 2009. WuDunn worked at the New York Times as a business editor and foreign correspondent in Tokyo and Beijing. She now works in banking. 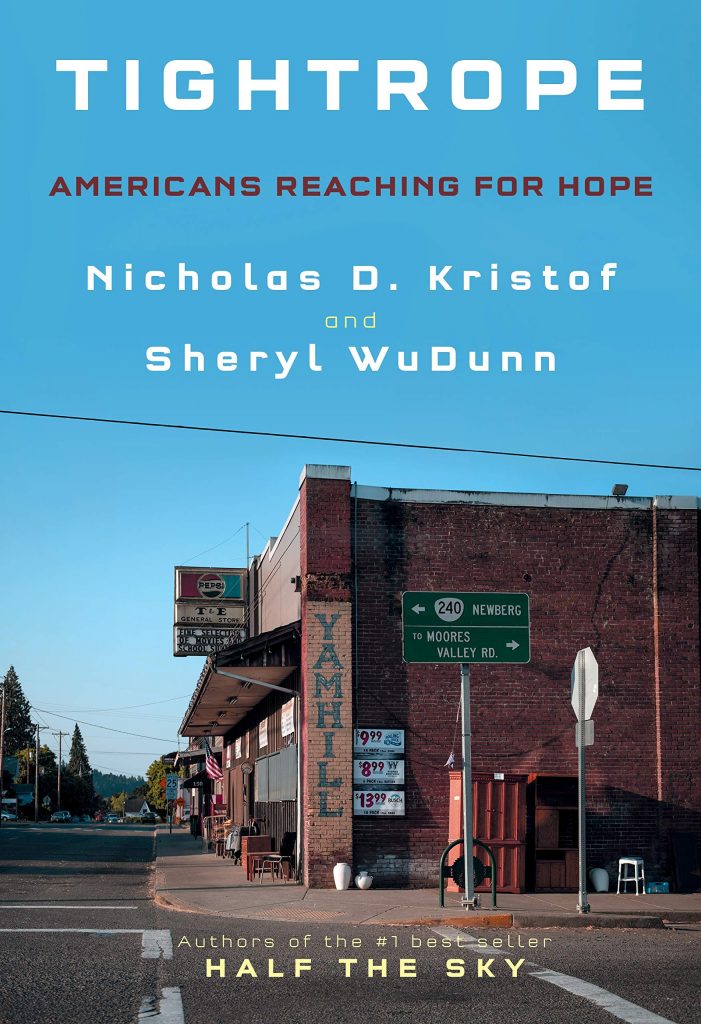 “A deft and uniquely credible exploration of rural America, and of other left-behind pockets of our country. One of the most important books I’ve read on the state of our disunion.”—Tara Westover, author of Educated

The Pulitzer Prize-winning authors of the acclaimed, best-selling Half the Sky now issue a plea–deeply personal and told through the lives of real Americans–to address the crisis in working-class America, while focusing on solutions to mend a half century of governmental failure.

With stark poignancy and political dispassion, Tightrope draws us deep into an “other America.” The authors tell this story, in part, through the lives of some of the children with whom Kristof grew up, in rural Yamhill, Oregon, an area that prospered for much of the twentieth century but has been devastated in the last few decades as blue-collar jobs disappeared. About one-quarter of the children on Kristof’s old school bus died in adulthood from drugs, alcohol, suicide, or reckless accidents. And while these particular stories unfolded in one corner of the country, they are representative of many places the authors write about, ranging from the Dakotas and Oklahoma to New York and Virginia. But here too are stories about resurgence, among them: Annette Dove, who has devoted her life to helping the teenagers of Pine Bluff, Arkansas, as they navigate the chaotic reality of growing up poor; Daniel McDowell, of Baltimore, whose tale of opioid addiction and recovery suggests that there are viable ways to solve our nation’s drug epidemic. These accounts, illustrated with searing images by Lynsey Addario, the award-winning photographer, provide a picture of working-class families needlessly but profoundly damaged as a result of decades of policy mistakes. With their superb, nuanced reportage, Kristof and WuDunn have given us a book that is both riveting and impossible to ignore.