John Willis will be present to sign copies of “Mni Wiconi Water is Life” along with artists that have contributed to the book.

John Willis is Professor of Photography at Marlboro College and a co-founder of the In-Sight Photography Project (www.insight-photography.org) and Exposures Cross Cultural Youth Photography Program (www.exposures-program.com). He was awarded a John Simon Guggenheim Memorial Foundation Fel-lowship in Photography after Views from the Reservation was first published in 2010. His photographs are in more than sixty collections, including the Amon Carter Museum, Center for Creative Photography, George Eastman House International Museum of Photography and Film, J. Paul Getty Museum, Heard Museum, High Museum of Art, Library of Congress, Museum of Fine Arts, Boston, Museum of Fine Arts, Houston, National Gallery of Art, National Museum of the American Indian, Nelson-Adkins Museum of Art, Princeton University Art Museum, San Francisco Museum of Modern Art, Tokyo Metropolitan Muse-um of Photography, Whitney Museum of American Art, and Yale University Gallery of Art. His other books are Recycled Realities, a collaborative effort with photographer Tom Young (Center for American Places, 2005) and Views from the Reservation: A New Edition (George F. Thompson Publishing, 2019). His Website is www.jwillis.net.

Terry Tempest Williams is an environmental activist and the author of fifteen books, including Refuge: An Unnatural History of Family and Place (Pantheon Books, 1991), Finding Beauty in a Broken World (Pantheon Books, 2008), and The Hour of Land: A Personal Topography of America’s National Parks (Farrar, Straus, and Giroux, 2015).

Shaunna Oteka-McCovey, a member of the Yurok Tribe, is an environmental lawyer, writer, and poet, and the author of The Smokehouse Boys (Heyday Books, 2005). 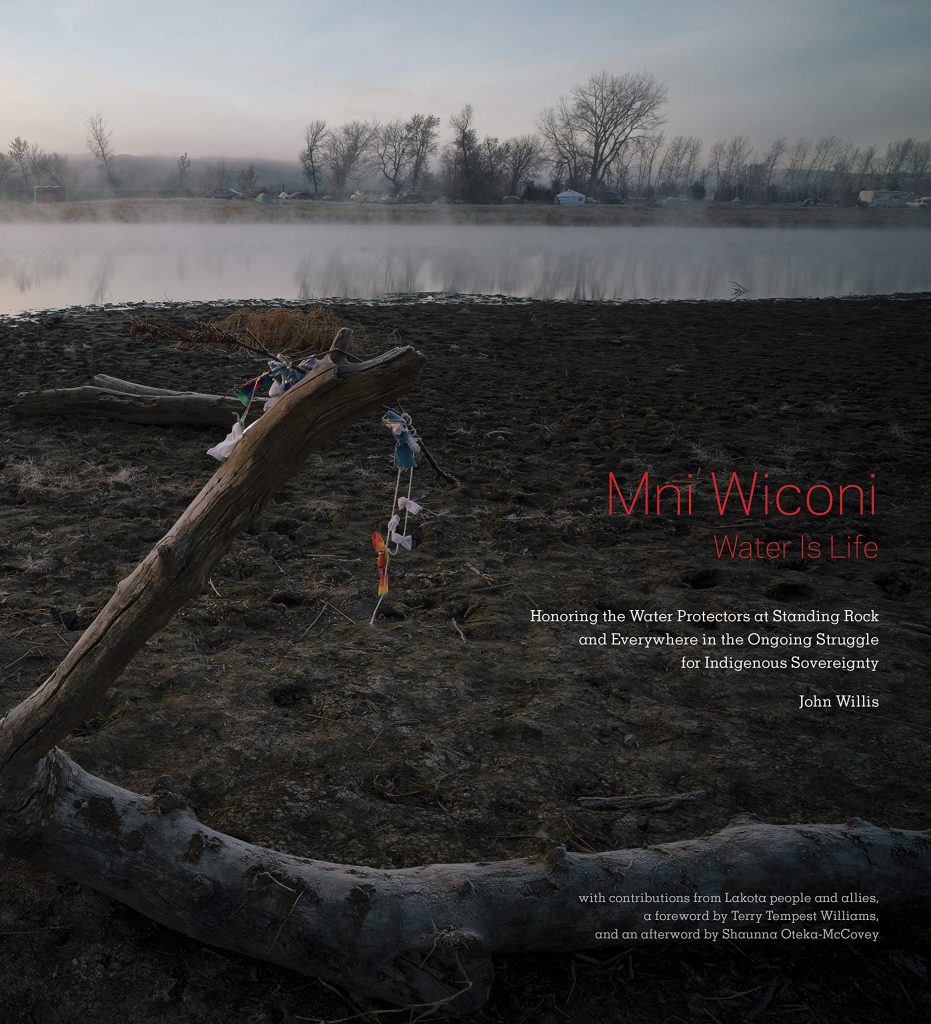 Viewing Mni Wiconi (Sacred Water of Life) and the No Dakota Access Movement as an isolated happening without acknowledging historical, cultural, and systematic circumstances leading up to it makes no sense. We cannot erase this past nor change it. In order to move forward in a better way, however, we must acknowledge the truthful foundation and recurring practices complicating what to some feel like isolated incidences. The pervasive and growing presence of extreme economic inequality in America is a worsening condition. Few situations reveal this inequality more than the conditions that Native Americans live under within their own homeland.

This book raises awareness of Water Protectors for those who were not at Standing Rock and honoring those who were, through experiences at the Oceti Sakowin Camp, the indigenous-led resistance movement by the Standing Rock Sioux Tribe against the Energy Transfer Partners project to build the Dakota Access Pipeline on sacred land. The goal is to acknowledge and better understand the dedication of the Water Protectors, as they chose to be called, standing up for the health of Mni Wiconi and so many other related causes for the seven generations representing the past, present, and future health of all.

People throughout the world, including members from between 240–300 indigenous tribes, were attracted to the cause and came to Standing Rock in full support of the protests. Even American military veterans, distressed by what they saw, came by the thousands determined to stand between the Water Protectors and police in defense of the rights for non-violent expression of resistance.

The book’s powerful photographs by John Willis are complimented by many Lakota voices and those of other allies through interviews, poetry, Lakota artwork, music through a downloadable CD, and historical ephemera. And essays by Terry Tempest Williams and Shaunna Oteka-McCovey provide new insights into age-old problems facing native people.