The Carrie Underwood book tour is now sold out.  If you are not able to travel to attend any of these events in person and still wish to order a signed copy of Find Your Path, we will be producing an exclusive slipcased Signed First Edition w/COA. To get on the waiting list for this book, enter your email in the form below or give us a call at (978) 572 – 5708 . This special collector’s edition will be available on a “first come, first served” basis and will be limited to only 25 slipcased copies.

Find Your Path: Honor Your Body, Fuel Your Soul, and Get Strong with the Fit52 Life 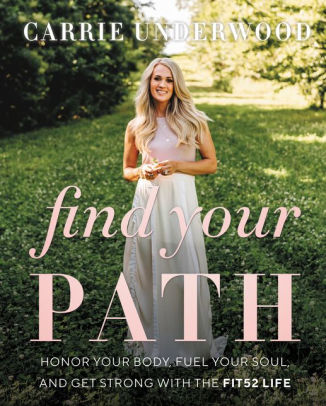 “I want to be healthy and fit 52 weeks of the year, but that doesn’t mean I have to be perfect every day. This philosophy is a year-round common-sense approach to health and fitness that involves doing your best most of the time—and by that I don’t mean being naughty for three days and good for four. I mean doing your absolute best most of the time during every week, 52 weeks of the year.”—Carrie Underwood

Carrie Underwood believes that fitness is a lifelong journey. She wasn’t born with the toned arms and strong legs that fans know her for. Like all of us, she has to work hard every day to look the way that she does! In FIND YOUR PATH she shares her secrets with readers, with the ultimate goal of being the strongest version of themselves, and looking as good as they feel. Carrie’s book will share secrets for fitting diet and exercise into a packed routine—she’s not only a multi-Platinum singer, she’s a businesswoman and busy mom with two young children. Based on her own active lifestyle, diet, and workouts, FIND YOUR PATH is packed with meal plans, recipes, weekly workout programs, and guidelines for keeping a weekly food and workout journal. It also introduces readers to Carrie’s signature Fit52 workout, which involves a deck of cards and exercises that can be done at home—and it sets her fans on a path to sustainable health and fitness for life. Fit52 begins with embracing the “Pleasure Principle” in eating, making healthy swaps in your favorite recipes, and embracing a long view approach to health—so that a cheat a day won’t derail you.

Throughout the book, Carrie shares her personal journey towards optimal health, from her passion for sports as a kid, to the pressure to look perfect and fit the mold as she launched her career after winning American Idol, to eventually discovering the importance of balance and the meaning of true health. For Carrie, being fit isn’t about crash diets or a workout routine that you’re going to dread. It’s about healthy choices and simple meals that you can put together from the ingredients in your local grocery store, and making the time, every day, to move, to love your body, and to be the best version of yourself.

Carrie Marie Underwood (born March 10, 1983) is an American singer, songwriter, fashion designer, and actress. She rose to fame as the winner of the fourth season of American Idol in 2005. Her debut single, “Inside Your Heaven”, made her the only country artist to debut at number one on the Billboard Hot 100 chart and the only solo country artist in the 2000s to have a number-one song on the Hot 100. Her debut album, Some Hearts (2005), was bolstered by the huge crossover success of the singles “Jesus, Take the Wheel” and “Before He Cheats”, becoming the best-selling solo female debut album in country music history, the fastest-selling debut country album in Nielsen SoundScan history and the best-selling country album of the last 17 years. Underwood won three Grammy Awards for the album, including Best New Artist.

Her second album, Carnival Ride, followed in 2007. It had one of the biggest opening weeks of all time by a female artist and won two Grammy Awards. Her next album, 2009’s Play On, was a commercial success led by the single “Cowboy Casanova”. Underwood’s fourth album, Blown Away (2012), earned her a Grammy Award and was that year’s second best-selling release by a female artist. Her first compilation album, Greatest Hits: Decade #1 (2014), was a chart and sales success that spawned the Grammy Award-winning crossover single “Something in the Water”. Her fifth album, Storyteller (2015), made her the only country artist to have all first five studio albums reach either numbers one or two on the Billboard 200 chart. With her sixth album, Cry Pretty (2018), she became the only woman to top the Billboard 200 with four country albums, and had both the biggest week for any album by a woman in 2018 and the best-selling solo female album of the year. 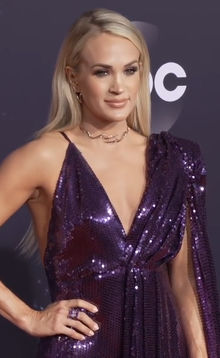